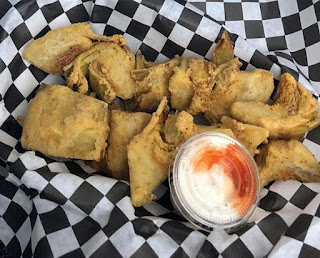 Is it Wednesday already!?  WOW!  Time is flying by - that's for sure!

This past weekend the fairgrounds housed the Wild Wind Festival which is a large folk art fall fest of sorts here in our region.  It's a Juried Show and has vendors from over 20-some states that attend.  It was said that about 7,000 people were there on Saturday.  Sunday's weather was awful.  But since I was on the grounds anyways...and EARLY...I was able to FINALLY eat the Artichokes from the one vendor that comes each year that I never was able to try up until now. 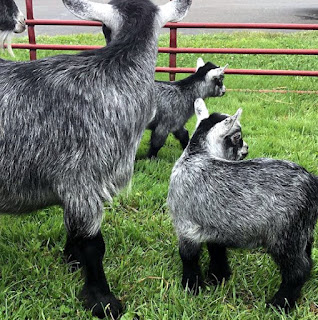 Fried Artichokes!  The photo above was the sample they had out so the sample showed it with mayo and hot sauce.  The vendor just gave me the hot sauce and I went back to my camper and mixed it with JUST MAYO Garlic Mayo and it was FAB!  They use Peanut Oil and the only thing on the artichokes was a cornmeal so it was vegan!  YAY!

I told you about me looking forward to seeing more goats and I did just that.  The guy who brings them had a few new additions.  These lil guys were only 3 weeks old and they didn't get too far away from their parents!  There was another one that was tan and brown that was about 8 weeks old and he was a bit more outgoing than these two.  Regardless, they were adorable! 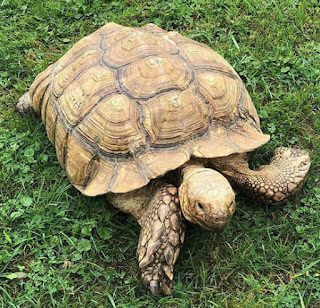 He also brought a bunch of turtles he had rescued throughout the years.  Here was the biggest one of the bunch.

I was able to spend quite a bit of time with my parents over the weekend which was nice.  It has been wonderful having them at the fairgrounds this summer.  They have been working their butts off, too!

I recently ordered from VeganEssentials so I will be having LOTS of new-to-me things to share once I get them in and sampled so stay tuned for that! 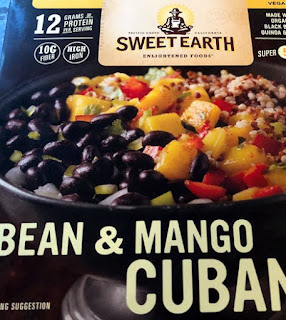 As for my contribution for Vegan MoFo today - it's a bit of a stretch - but here goes...Spicy without the Chillies was the prompt.  Doubt I achieved it but thought this find was worth the mention.

It was pretty sweet but had some nice spices mixed in.  I added a teaspoon or so of Just Mayo Garlic Mayo to it for a little something different.  Yup!  You got it!  I ate this at 'camp'.  I still had some vegan convenience foods on hand that I wanted to finish up before cleaning out the camper for winter storage.  I also had some corn chips with this and it scooped up nicely.

I believe I found this new-to-me Sweet Earth product at the Wegmans in Lakewood.