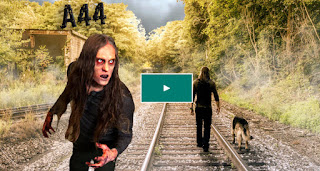 Just a quick post today because I seemed to be running out of time again!  YIKES!

Last week The Vegan Zombie passed his Kickstarter goal of $80,000 to start producing his VEGAN Sci-Fi Movie A44.  I donated a very little bit to the campaign on the last day!  Can't wait to hear about the progress! 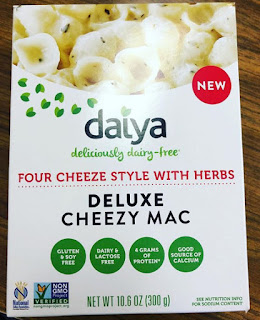 I received my shipment from Vegan Essentials and over the next couple of weeks will be sharing with you some of the things I ordered.

Today I have 3 Daiya items that were in that shipment, actually.

First up is this 4 Cheese Style with Herbs Cheezy Mac.  Here, locally, I am able to get the 'cheese' packets and in Lakewood they sometimes have the other 2 macs.  I have been able to try them and they are ok but it's not something I buy a lot.  This was also ok...again...not something I would buy weekly...or even monthly!  But it's good for a treat or on occasion.  I did like the addition of the herbs to the mix.  The pasta noodles were a little strange but didn't taste bad.  Just different, really. 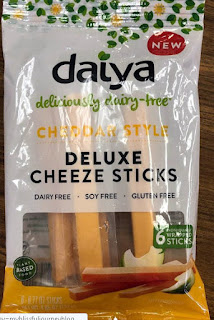 The other two items are these Cheeze Sticks.  I bought one of each as you can see.  The Cheddar Style and the Moz Style.

So far I have eaten both of them as a snack.  Convenient for on the go.  I think they have more flavor than the block style cheeses.  I assumed they used the same base as their blocks and just cut it different but Daiya responded on my IG photo saying that it's their own recipe blend specifically for the sticks.  Interesting.

I have also tried these Cheddar sticks finely chopped and tossed and melted in with regular pasta noodles, almond milk, Earth Balance, and a bit of nooch.  It turned out pretty good for just throwing everything in.  I will say that the flavor of it melted is more of a sharper cheddar than I remember from Daiya's other products.  I think I like using this better than the shreds, actually! 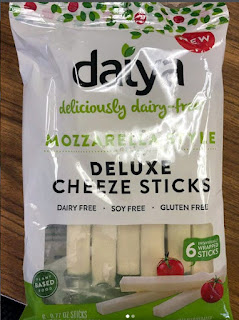 I might be trying the same method with the Moz sticks later tonight and melting then pouring over pizza.  Or maybe I will just add the finely diced Moz to the actual pizza.  I haven't made up my mind yet tho.

All-in-all I'm pretty happy with the sticks!  I would buy them again if I saw them for the right price!  Now...if someone just did vegan string cheese and vegan cheese curds!

Questions of the day...have you tried any of these 3 products from Daiya yet?  What did you think?

Did you hear about the Vegan Zombie's Vegan Sci-Fi A44 Movie?  Were you able to be a part of the Kickstarter?
Posted by Jennifer at 2:03 PM