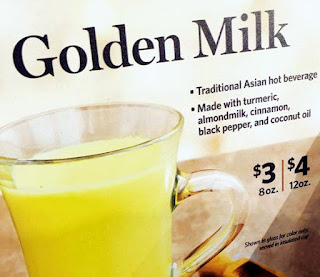 I found a few things I forgot to add to yesterday's post!  First off is this Golden Milk from Wegman's that I had about a week or so ago!  I opted for the 8-ounce.

You know how I LOVE Turmeric and I try to add it to at least one of my food or beverages a day!

This was pretty good.  It was mellower than I expected.  The Black Pepper sank to the bottom and it was a bit harsh but not overly-so.  I need to make more of this myself - at home.  It's easy and I have all the ingredients on hand. 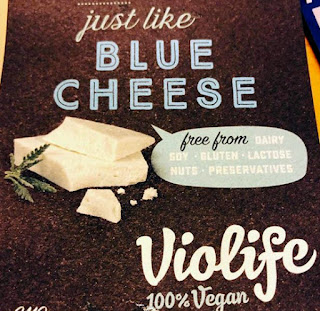 One of the many 'new-to-me' products I was able to get my hands on this past week and our travels to Ohio was this Blue Cheese!  Vegan, of course!  It's by VioLife.  I have seen The Vegan Zombie and others post about it from Expo West and I thought it was going to be a year or two before it came over to the East side of the US.  So when I saw it - I didn't hesitate to grab it.

I will say...it's ok.  It's not OVERLY awesome.  I don't think it's something I would nibble on by itself.  However, I have tried it two other ways.  One was to melt it on a bagel - that was fairly good.  The other was to do a small dice and mix in with an Alfredo.  That was YUMMY!

It's something I will continue to play around with.  I'm convinced it has potential.  I'm thinking the crumbles on a salad paired with another vegan creamy ranch or blue cheese type dressing would be stellar.

A few updates...thankfully, I seem to have the Dyshidrotic Eczema under control with the help of Witch Hazel and Nettles Tea.  I'm going to continue to use both of these things because now I have a boil on my leg from a pair of pants that was irritating me.  Both can be used for both issues.  And I'm going to try and drink Nettles Tea each night for the additional benefits while building up my immune system and a bit of self-care for my liver. It's also great for inflammation, pain, and skin so those are things I can put in my mental Rolodex, too!

For some AWESOME info on BOTH:
Nettles Tea & Witch Hazel
Posted by Jennifer at 1:40 PM