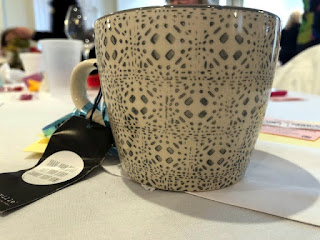 Saturday was a BUSY day!  I volunteered to help the local Zontas with their Lucky Numbers Fundraiser.  It's the first time I attended the event but I hope to be a member and wanted to get one under my belt before I was a member next year (that is if I am accepted as a member).  It was a pretty crazy yet fun event!  The ladies who organized it did an AMAZING job!  I didn't win anything (as far as the large prizes go) but it wasn't about that for me...I just wanted to help if I could.  I did, however, win this lovely mug and gift certificate to a local coffee & tea shop! 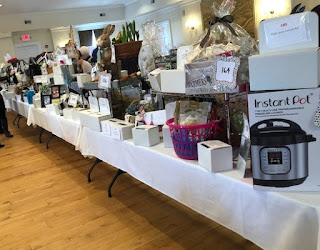 Well over 200 people attended and it was a HOOT to see everyone go bonkers over the winnings!  Here are a few photos of some of the high-end prizes at stake.

With my ticket, I received 5 chances.  With those - I went for the kitchen items.  The 8-Quart Instant Pot on the far right was one of the ones I had my eye on.

There was a heavy-duty Spiralizer, too, that looked pretty cool.  I already have 2 spiralizers but nothing like the one that was on the table. 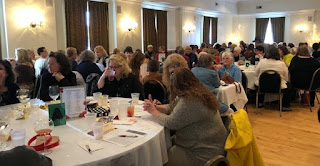 Here was one of the sections of the room that was filled with participants!

Lunch was served (I had a salad) and there were other drawings and such that you could participate in.  Some people dressed up and some people had noisemakers for when someone at their table won! 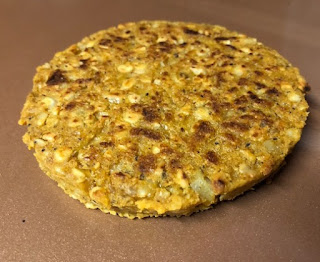 After the Lucky Numbers Event, DH and I went over to a friends house for dinner.  I didn't have a lot of time to make anything special but I brought the makings for a large salad and grabbed some storebought hummus and pretzels.

Yesterday, we wanted to find a Waffle Maker but couldn't find one locally.  Instead, I found this Copper Electric Skillet and make pancakes.  I would show the pancakes but I would rather wait to post one that was tastier than the first attempt.  I will show this Vegan Burger for now. 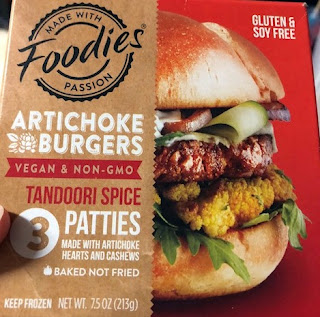 This is the Veggie Burger on the skillet above.  I found them at Mustard Seed Market and have had them in my freezer since we got back.  Last night I thought I would finally try them.  They were pretty good.  I didn't put it on a bun but I did make some dipping sauce for it.  You can see that in the next photo.

The Tandoori Spice in these was potent - but you know me - I'm a fan of spice!

For the dipping sauce it's basically a Vegan Aioli I threw together.  I think next time I will make it thicker.  The flavor was good, tho! 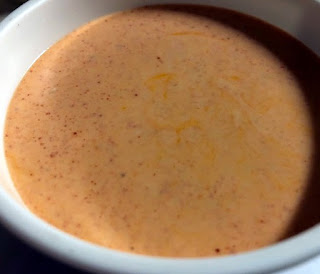 It was pretty good on corn chips, too!

I probably could have added some nooch to it, too!

Question of the Day...what was the last brand of veggie burgers that you tried that was 'new to you'?  What did you think of them!?