DH and I got a fairly early start this morning and drove to Buffalo Wholefoods - among other places.  While I stopped in at WF I picked up a few things that were things I have been looking for, haven't been able to find in other places, found at a low price, or really needed.  One of the first items I want to share with you is this Farmhouse Culture Cola Gut Punch Sparkling Probiotic Veggie Drink.  Farmhouse Culture the brand known for its probiotic-rich Kraut, fermented veggies and Gut Shots, has introduced a ready-to-drink sparkling probiotic beverage line called Gut Punch. It comes in five flavors, including Mango Guava, Ginger Lemon, Cola, Strawberry Hibiscus and Cherry Cacao. Made with a fermented beet base and infused with real fruit essences, the line contains no added sugar added, with each variety retailing for a suggested $3.79 per bottle, however, it was $3.99 at Buffalo Wholefoods.  Normally, I wouldn't spend that much for a Booch or other Probiotic beverage but it looked really interesting and I probably won't be able to visit another WF for 4 to 6 months.  Personally, I wanted to grab the Mango Guava but I thought DH might like to try the Cola and we could split it.  He tried it and hated it.  I tried it and it was ok.  VERY different.  Glad I tried it - probably wouldn't spend the money on it again unless it was drastically reduced and on sale.

Over the next several days I will share more of my WF Finds with you but I also wanted to tell you about our trip to Barnes & Noble!  Since we don't normally get each other or much for Christmas we decided to pick up a few things while we were out today.  DH went to a couple of music stores and found some interesting things and I found 4 books at B&N.

Before I share the first of the 4 books I grabbed I thought I would show you these cute i-Clips.  They are magnetic bookmakers with Unicorns on them!  Many of you know that I collect Unicorns and I knew I just HAD to have them!  They are small but fun.  There are 4 sets of 2 for a total of 8 i-Clips!

There was snow on the ground in and around Buffalo.  A couple of inches in yards but the roads were clear.  Near our house we didn't get any of the snow they were calling for but my sister about a half hour away got about 4 inches.  I was lucky enough to spend time with her and my niece Trinity yesterday for a couple of hours and then DH and I met up with some friends and stopped by a small town for a Christmas Walk.  It was VERY COLD. 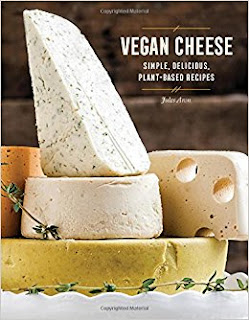 Sorry...back to...TODAY!  Here is the first of 4 books I wanted to share with you from our B&N Buffalo Trip.  Vegan Cheese by Jules Aron.  I've only thumbed thru a few of the recipes so far and I can't wait to try to make some of the cheeses!

I will try and spread the other books throughout future posts.  The more I have been thinking about the Virtual Bookshelf the more I feel like I need to do it myself and not use a widget or app.  It's going to take a LONG time but little by little I hope to add more and more books to my bookshelf.

I've also decided to start including more music to my posts.  At first I was thinking about adding a song to each post but maybe I will do a Monday Music Mention or something to kick things off.  What do you think!?