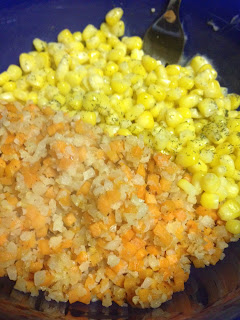 Since I have been trying to avoid bread and pasta this month and because I didn't want to buy anything at the store until I absolutely HAD to - I have been eating some really odd things!

This was one of them.  But it ended up being VERY memorable!  I went to Giant Eagle in Erie a weekend or two ago and found a bag of frozen Cauliflower and Sweet Potato.  Those were the ONLY 2 ingredients!  So, of course, I was curious about them!

I heated them up in a frying pan on the stovetop and added a bit of Earth Balance, Cinnamon, and a pinch of Black Himalayan Sea Salt.  It was absolutely incredible!  It was certainly a comfort food!  In addition, I did a side-by-side with frozen corn.  I always like adding dill to my corn!  YUM! 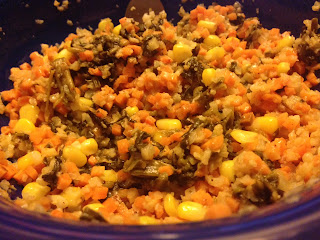 I had some leftovers of both side dishes.  I found a can of spinach that I had to use quickly so I decided to throw it all together in a bowl.  This was the outcome.  It was pretty good, too!  Next time I would probably try adding a sauce and a bean of some sort.

Have you ever seen and/or tried the frozen, diced Cauliflower and Sweet Potato Combo? 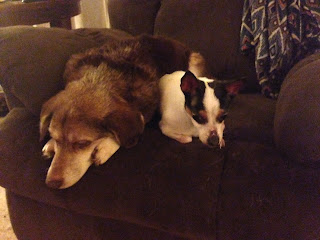 I have been working on a few projects in the evening that requires research so I have been at my desktop typing away.  The other night I turned around and saw Riley and Cricket basically spooning!  LOL

Fall is certainly here.  It's getting much colder.  The last few mornings have been at freezing point.

I hope to do some more soups and blender recipes and dishes soon!  Happy Friday!
Posted by Jennifer at 7:21 AM