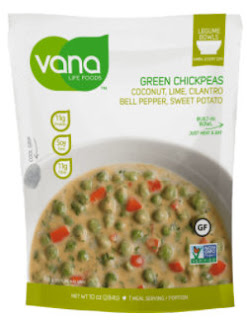 Did you know...a 1/2-cup serving of green chickpeas has 364 calories, provides 19.3 grams of protein, and has 17.4 grams of dietary fiber. Although it contains 6 grams of fat, only about 1/2 gram of that is saturated fat. It contains 10 grams of natural sugar.


I recently read up on Green Chickpeas while having this lovely vegan option for lunch. Although, I cannot remember where I found it because I bought it about 2 months ago I knew it was something I wanted for a work lunch!


This was SO creamy! SO sweet! SO YUMMY! I would absolutely get this again if I were to come across it! The flavors were so involved - YUM! 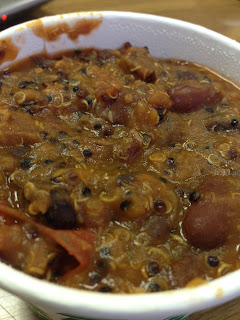 I can't believe I forgot to share this hearty soup with you when I originally ate it. It was from Total Evolution and one of their limited time offerings. It had Quinoa, Pumpkin, Black Beans, Kidney Beans, and spices. It was vegan and awesome!


The walks into work have been chilly again but 'tis the season. It's to be expected here but I can't complain too much. It could be a LOT worse! We could already have FEET of snow on the ground and we don't...YET. So, I'm thankful.


A quick furkid update...Paco has been doing ok. We are trying to time it right to take him back to the vet. We are going to opt for the exploratory surgery but I still have doubts about it. As for Charlie, he's still plugging along. He's still his feral self but slowing down (a little), tail-less, deaf, and 17 years old. 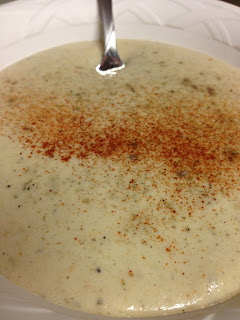 When I was telling you all about the Potato Peeling Contest I forgot to tell you about the soup I made.

I topped with Smoked Paprika. It was tasty but a bit pasty...glue-like. Probably needed a bit more Almond Milk, but, still good.
Posted by Jennifer at 8:42 AM