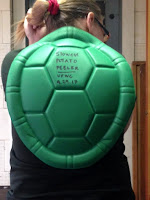 How's THAT for a Blog Post Title?  Yup!  It's true!  A few Friday's ago I participated in a Potato Peeling Contest for Charity.  I was nervous that I was going to come in last but I ended up having a lot of fun and walked away with this groovy award!  I know the guy next to me was slower than I was but he won the Longest Peel Award so 'it's all good'.  Maybe the organizers knew that I would get a kick out of it!  I don't know!  It was all for a good cause!  It was the kick-off to our local Torchlight Campaign for United Fund.  There are several organizations locally that benefit from the funds raised each year. 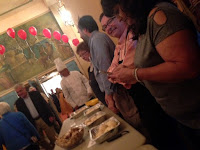 There were about 9 of us that participated in the Potato Peeling Contest including someone from our local paper, our radio stations (that was me), one of our county commissioners, a few educators, and ag people, too!  Awards were given for fastest and most accurate, the longest potato peel, and the slowest and most taken off with the peel.  That is where I come in.  Perhaps I just took much off of the actual potato.  My original plan was to create a tool that basically peeled it for me. 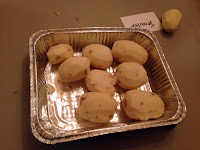 I wanted to take a battery operated handheld drill and put the potato on the end of that and peel it while it was spinning.  It didn't work the way I hoped so I didn't do it and changed courses at the last minute.  These are the potatoes once I was done with them.  I also think there was some trickery that went along with it because I ended up with 2 extra potatoes in my bowl before they weighed them. It was all in good fun but it was a bit ironic that the vegan was the slowest peeler!

In other news - I FINALLY got my hair cut and colored!  Woot!  It's been about 10 months since my last visit and I was WAY past due!  If you look real close in the first pic you can see how long my hair was in ponytail.  It's hard to tell but I had it pulled in front of me quite a bit.  This photo is after I got it done and it's about shoulder length in front and just a bit shorter in the back.  End result - they took over 6 inches off me - I guess I didn't know how long my hair had gotten until they cropped it off.  It does feel better after getting the length off a bit.  I still have my hippie hair it's just a little more manageable.
Posted by Jennifer at 7:18 AM