I Acquired 25 Pounds of Mushrooms Over The Weekend...FREE...And Other Weekend Happenings 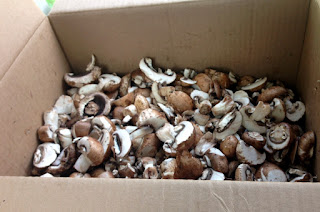 Over the weekend our region had one of the largest seasonal folk art craft fairs in our area and one of the vendors asked if any of the volunteers wanted free mushrooms so a friend of ours said that he knew someone who would want them.  They were already washed, sliced, etc and ready to go.  When he brought the box of mushrooms over I was SHOCKED!  There had to have been a good 25 pounds of mushrooms in there!  Here are some of them! 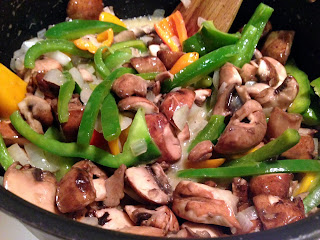 After sharing with 4 other people who only grabbed about 5 pounds each I still had LOTS left.  So last night I made soup!  LOTS and LOTS of soup!  More on those soups in future posts but today I thought I would post some other random photos from the weekend.  After 4 large batches of soup - my mother and I did a few other things with them including a favorite from my childhood that we veganized.  POM (Peppers, Onions, Mushrooms).  We cooked them in Earth Balance Vegan Spread instead of the butter/margarine we used to when I was a kid! 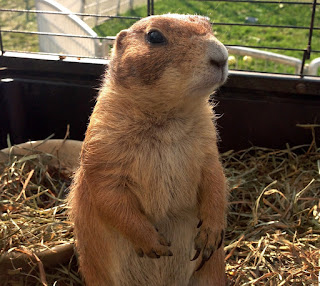 At this same folk art fair was this lil guy...a Prairie Dog!  My father and I adore them!  There is a man who brings his fur friends each year - and we have seen him at other events - I believe he rescues a lot of the animals - you can tell he really LOVES them!  Each animal has a name and he remembers ALL of them!  He also currently has about 300 goats and mini goats, too!  He was telling a lady that he will NOT bring a goat who doesn't want to come that day.  They all want to go (he doesn't force them).  He says "ok - who wants to go" and a bunch of them will run over to the truck(s)!  He had some turtles, large rabbits, and a mini horse, too! 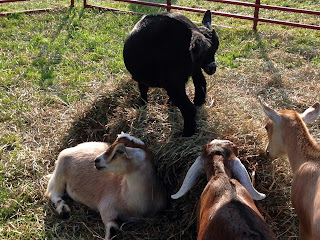 Oh yes!  And the goats!  They were adorable!  All so friendly and well behaved!  I really connected with a few of them!  I have wanted 2 goats for a while now but don't know the first thing about caring for them.  Regardless they are so cute!

I can't believe it's fall already!  Oye!  It bums me out because I know that snow is right around the corner!

I will cherish the non-snow weather for as long as I can, tho! 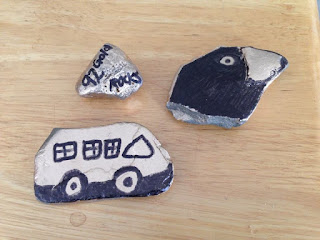 The decorated rocks are popping up all over for various groups so we decided to do them for the radio station.  Here are a few that I started already!

I'm not the best drawer but I try and it's FUN - it gets me out walking a bit more and it helps relieve some stress!
Posted by Jennifer at 1:17 PM