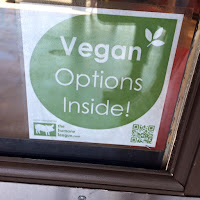 Since this blog is about trying to keep things POSITIVE I thought it was rather fitting to post about something I have been doing lately that is a form of positive activism.

Many activist get a bad rap because of all of the negativity that pops up.  And I'm fully aware that we wouldn't be activists at all if everything was 'hunky dory' and all was perfect in the world.  I have been thinking of more positive ways to spread the word and a few months ago when I saw that The Humane League had these static stickers for volunteers to hand out to restaurants I knew it was within my calling! 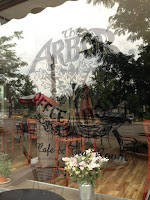 The stickers I was passing out lately are a little hard to photograph but I wanted to give a shout out to a few places for placing these stickers in their window and in a great spot!  Both places were overjoyed to slap them on their window!

The first place is The Arbor House Cafe and Tea Room and their Facebook Page is located HERE.  I've blogged about them before and I will blog about them again!  It's a neat place and I graduated with the brother of the owner.  He works there, too!  Their mom was actually my Color Guard adviser while I was in high school marching band, too!  Wonderful family! 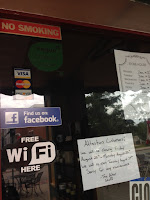 I took this snapshot this morning as I was walking into the office.  You can see the sticker in the upper left hand corner.  Some of the vegan options they offer are bagels (with peanut butter), a few different kind of wraps with veggies, hummus, sprouts, their own dressing, etc.  They also have a garlic hummus and corn chips that is good, too!

Their walls are often covered with art and they have acoustic groups and bands in there every once and a while.  Their tea offerings are expanding, too, and they even offer High Tea (Afternoon Tea) gatherings! 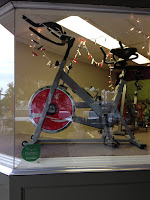 The other place I would like to give a shout out to is Total Evolution Cafe and Smoothie Bar which is within the same block as Arbor House.

They are fairly new but the business owner has owned other businesses in the past.  The sign outside and above their entrance currently says Seasons On The Avenue - that was her last business name.

As you can see she put TWO in the window...one on the left of the entrance which is near the bottom of the window near the wheel of the exercise bike. 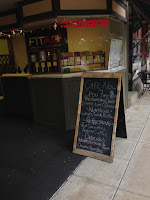 The other was in the right side window below the display of smoothie mixes.  You can see some of the things they offer for healthy snacks, smoothies, juices, wraps, etc.  But I will be posting something later today or tomorrow with some of the vegan options I have been gnawing on as of late.

What I find the most interesting about this place is that they have a base menu but almost everything is customizable, too!  They offer an Oatmeal Bar with Steel Cut Oats, Grits, and more for your base and they have over 20 toppings to choose from, too!  They do 'build your own wrap' and rice bowl meals, too!  Very Cool!

I hope to make it over to Tabouli very soon, too, to see if they would like to put a Vegan Options Inside sticker on their window.  I'm assuming they would because they note the vegan options on their menu!

There aren't any fully vegetarian restaurants where I live but a handful of them have been opening their minds and hearts to include vegetarian and vegan options lately and if that is the case I want to do what I can to promote that fact.  I have mentioned before that the next city over they do have a veg restaurant but I haven't been able to visit as often as I would like to.  I hope to go over there, too, and give one of these stickers to them!
Posted by Jennifer at 9:46 AM