When In Doubt...DIP It OUT! 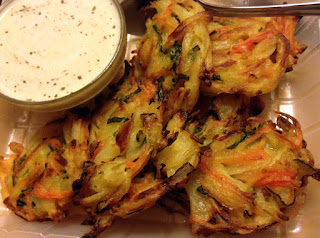 Sometime life gets in the way!  Lately - life has been getting in the way A LOT!  So sorry!  Just another quick post to say HELLO in the meantime!  Food has been uninspiring as of late.  I have been eating out a lot which has been a lot of salads, wraps, and such.  When I am home I have been so lazy.  I haven't wanted to do much around the house with the little time I have or am there.  Recently I busted out these Birds Nests and instead of having the soy based sauce that came along with it I wanted something creamy so I did a basic Cashew Sauce. 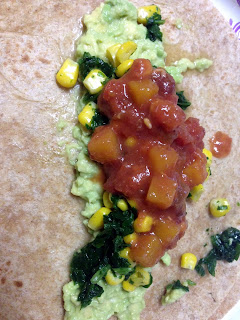 When I have been home I tend to being throwing anything and everything into a wrap or burritos still.  Yes - I have been on a kick!  I ran into Aldi and grabbed 3 items.  My total was $3.99.  I grabbed an Avocado for 99 cents (which is high for Aldi but not as expensive as the $1.50 to $2.50 I have seen in other places) and I had to do something about my Avocado Craving (it was at an all time high)!  I also bought  Wheat Wraps and Mango Salsa!  In my freezer I still had TJ's Organic corn and spinach!  This combo was AMAZING!  It was both sweet and savory!  YUM!  Plus I was able to include greens!  And there were black beans in the salsa, too!  Greens, Beans, Fruit, Veggies, YUM! 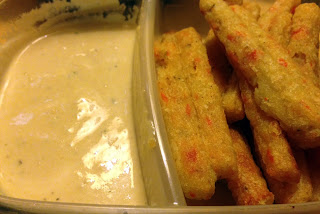 Last week I finally busted into those Carrot and Potato fries!  They were pretty good but I like the Broccoli and Potato even more!  For the dipping sauce for these I did a Vegan Aioli!