One Step Closer To Being An Aunt! 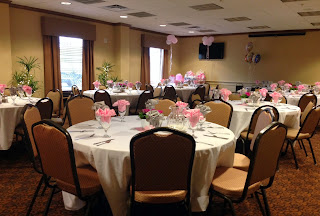 Saturday was the BIG DAY!  It was my sisters baby shower!  We had it at the local Hampton and the space was lovely!  I have to admit that I hate the color pink but the set-up was nice!  She opted for pink and grey!  Chevron, even!

Here is a photo of the party prior to the start time!  We decorated the night before and a few hours prior we brought everything in, too! 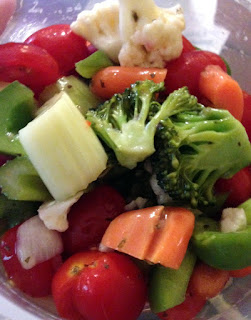 I bought and brought a 5 pound bowl of marinated veggies from a semi-local store and catering place!  It was WAY CHEAPER to do it this way than to buy everything individually and marinate it myself!  It was an Italian Dressing type marinade of sorts.  No dairy!  The veggies were all raw and included cauliflower, broccoli, cherry tomatoes, celery, carrots, onion, green peppers, etc.  It seemed to be a hit because it was the first thing we ran out of on the food table!  And to think - I thought 5 pounds would be too much!  There were about 50 to 55 people there.  The turn out was much better than I thought it would be - however - I didn't know a lot of people there.  My sisters MIL's friends made up the majority.  I was happy that my Aunt Kathy (my Dad's sister) and my cousin Ricky's wife Michelle drove over 3 hours to attend.  My Aunt Carol (my mom's sister in law) also drove about 2 hours, too! 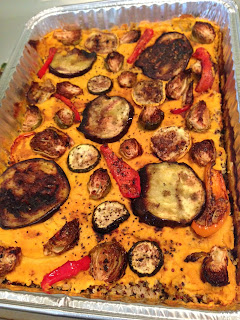 For MONTHS my sister requested I make a Hummus Quinoa Casserole.  Of course I wanted to fulfill that request.  I ended up making 2 of them as you can see in these photos!  Since it's a recipe found in Dreena Burton's Vive Le Vegan Cookbook I won't post it here but I will tell you a few variations.

This one I used Tri-Colored Quinoa for the base.  I used Yam Hummus for the middle layer.  And for the roasted veggies I used Zucchini, Summer Squash, Eggplant, Red Bell Peppers, Brussels Sprouts, and Yellow Bell Peppers.

I have to say this is the first time I attempted to make Yam Hummus and it turned out pretty awesome if I do say so myself!  I will certainly have to do it again! 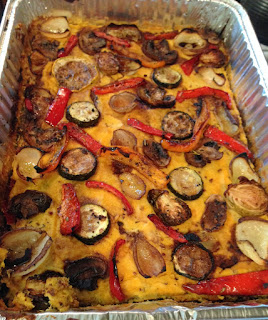 For this one I did Red Quinoa on the bottom.  For the middle I used Plain Hummus but there wasn't quite enough and there was too much of the yam hummus so I combined the two hummus' here for this one.  For the roasted veggies on top of this one I used Sweet Onion, Mushrooms, Zucchini, Summer Squash, Red, Orange, and Yellow Bell Peppers, and just a few leftover Brussels Sprouts from the other one.

BOTH  of these casseroles were gone by the end of the day!  SO I guess they were a hit, too!  Funniest part is...I bet no one noticed they were eating vegan!

These are pretty intense to make - especially if you are making more than one at the same time!  You should have SEEN the kitchen OMG! lol!!!! 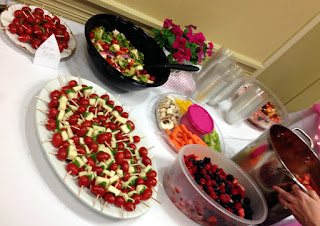 So on to more food but not all of it was vegan so I just skipped over that stuff for my own plate.  My mother made the BIGGEST Fruit Salad I have ever seen in my life!  The first batch sat in a large corn pot.  There were two other LARGE containers full of the fruit salad used as back-up, too!  WOWZA!

There were raw veggies and tomato and basil with Balsamic, too!  One without dairy and one with dairy. 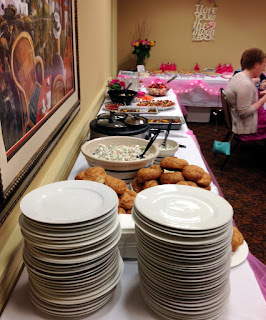 To show you more of the festivities here is a shot of the food tables.  There are non-veg things mixed in but still there were a lot of things that I was able to eat which you will see in a bit.

It was rainy on Saturday so I'm glad we were inside.

It was a nice space for a shower, too!  My favorite part of this hotel is the lobby and I totally forgot to take a photo of it.  I'm pretty sure at some point I will be there again for a meeting or something so I will try and remember to take a pic then!

My mother also made like 3 HUGE batches of candies (not vegan) but a hit with the masses!  Of course she always over does it so I had to bring some in to work to get rid of it! 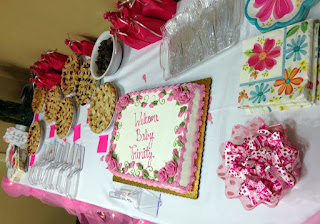 And of course NONE of this is vegan but I had to share it with you!  There is a regional pie maker that is adored here and a lady brought 7 of their pies!  My husband said they are the best pies he's ever had in his life and was upset when I didn't bring any home for him!

Then there was the cake!  YES!!!  My niece's name is going to be Trinity!  Not sure if you noticed that! 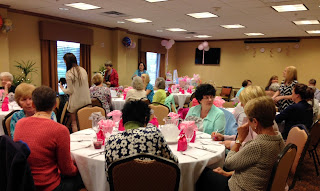 Once the room filled up it was a bit snug but still nice!  Here is everyone socializing!  My sister's sister-in-law brought her new mini-Polaroid camera and took all of the guests pics and put them in a book for them to write bits of MOM ADVICE for my sister.  Neat idea!  And pretty cool mini-camera to boot!

Here's a quick pic of my sister Megan.  It's hard to tell from this angle but she's definitely showing!  I took one from the side but she had a really funny expression on her face and I'm sure she would kill me if I posted it here! haha!

She has about 6 weeks to go!  Her due date is June 14th.  It's finally starting to feel real that I will soon be an aunt!  I will be known as the CRAZY AUNT and I'm totally ok with that!

I have so much more to post and blog about but I realize how photo heavy this post already is so I will only blog about the shower today and save the rest of the weekend happenings for tomorrow thru Friday!

Just a few more pics in the meantime for the shower... 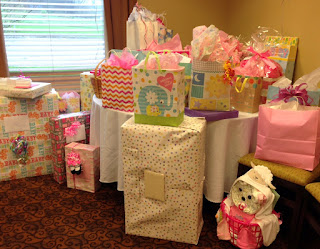 Here is the beginning of the present pile!  I'm pretty sure it doubled in size shortly after I took this photo!

She got a bunch of cool stuff.  One thing I laughed about was the wipe warmer.  Yeah!  It's a warmer that WARMS...WIPES!  I am probably the only person on Earth that finds that funny!

And you see that Diaper Bear in the right hand corner?  I had to take a closer look... 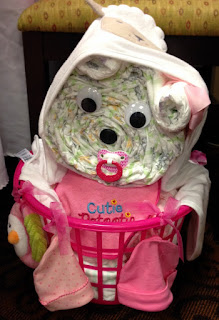 I'm not really an "Awwwwww....CUTE...." person but if you don't get a kick out of this there may just be something wrong with you (juse kidding)!

I never thought I would be that person who would want to 'see if the baby was kicking' but I am.  Not that I would do that to anyone other than my sister but still!  I guess I am NOW that person!  I'm a bit obsessed with her stomach and Trinity flip-flopping around in there!

I can't wait to meet her!  I know my sister will be a great mom, too!

And Trinity will be SO Spoiled!  TOO Spoiled!  But too bad, so sad, right!? 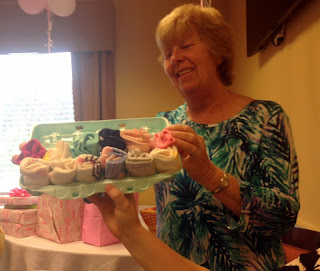 Another thing that was clever was this gift!  It was a dozen eggs container but when you opened it - it was a dozen baby socks instead!  This is my mom holding it up!

Jody - who was a co-worker of my father's before he retired in October was the one behind the idea of this one!  Really nifty - if you ask me - but then again - you didn't ask me...I just told you!  (Like you had a choice, eh?) 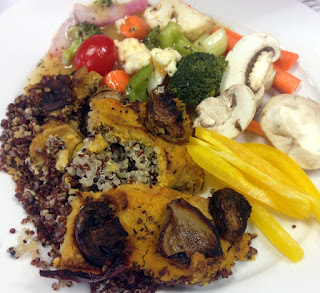 And FINALLY...my personal plate of food at the shower!  I like to call this one...

What a Vegan Eats at a Baby Shower

And I think I will stop right there for now!  More tomorrow!

What did you spy with your lil eye that looked interesting at this party?