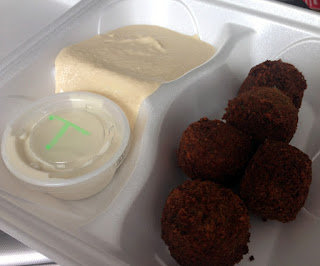 I will have multiple posts today so be sure to check back!  First up I'm VERY EXCITED to tell you that there is a NEW restaurant in town!  Yup!  In the small town where I live there is a new eating establishment that opened on Monday called Tabouli.  It's a Mediterranean Snack Bar and Cafe.  They have MANY vegetarian and vegan options available and they are clearly marked on their menu as such!  None of my co-workers have ever had Mediterranean Food (other than Greek Mediterranean Food, that is) so I brought a few things back for them to try! 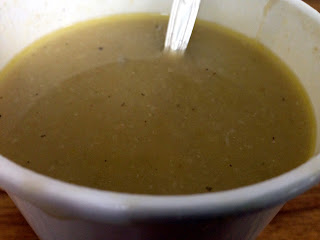 In the first photo above is their Falafel made with Chickpeas, Onions, Parsley, and seasoning.  Some of you know I'm a HUGE fan of Falafel so of course I adored this!  I will note...their Tahini Sauce is made with Yogurt so I offered that to a co-worker as it isn't vegan.  Their Hummus is the vegan option for this.  Both are shown.

The other photo is of their Lentil Soup.  It's a thinner soup and the Lentils appeared to be ground and not whole.  The caramelized onions kicked the flavor up a notch!  YUM!

I know I will be ordering a LOT from Tabouli so be on the look out for more posts!  It's a block from where I work so I'm sure they will get to know me real well - and I - them!
Posted by Jennifer at 6:27 AM