Eating Vegan On A Budget: Stretching Your Vegan Cheese Recipes 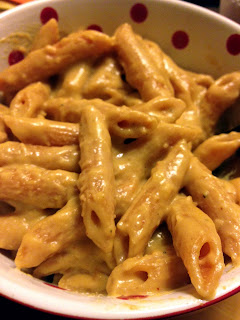 If not all of my vegan cheese sauces - MOST of my vegan cheese sauces seem to be a 'one and done'.  Meaning I throw everything into my blender - wet and dry - make the cheese sauce - and throw it on whatever I am wanting to CHEESE UP.  Especially if I am using cashews or another kind of nut for the creamy base this will be a pretty expensive vegan cheese sauce...considering a pound of cashews are anywhere between $11 and $16.  When I have made Vegan Cheese Sauces in the past I usually use 1 cup of cashews on the average.  So that means 1 cup of cashews for 1 dish.  After Googling this I have noticed that you usually get about 4 cups of cashews in a pound.  So that means that I'm spending between $2.75 and $4 per dish just on the cashews (if they are between 11 and 16 bucks).  WHAT?  OMG!  So...there is a method for all of this MADNESS here, REALLY!  PROMISE!  Keep reading... 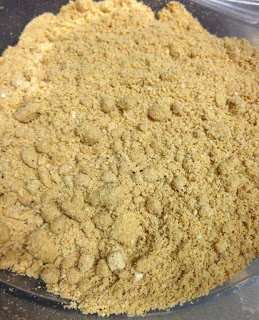 I recently came across a recipe on Veg Kitchen and it was a recipe from Miyoko Schinner.  Yes...THAT Miyoko Schinner!  Miyoko...the Vegan Cheese Goddess!  You can see her recipe at the link above.  You know me - I use what I have on hand - so I tried a few tweaks - and they seemed to work nicely!  The first photo above is the aftermath of this recipe my first day.  The second photo is from ALMOST the beginning.  I used my Vitamix.  I can't believe I'm going to say this but I don't think a Vitamix is the way to go with this.  Unless you are REALLY patient and do it 'low and slow'.  If you KNOW ME - you know I'm NOT the most patient person.  It WORKED tho!  This was my first attempt.  There were some clumps but I put individual portion sizes of the dry mix in the refrigerator and then when I took one of them out I put it in a coffee grinder to loosen and 'all was well.' 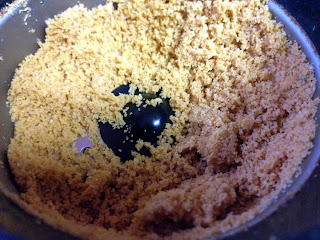 Here you can see the coffee grinder attempt to 'fluffen' the dry powdery mix.  I have a small coffee grinder that I use for spices and such.  I don't use it as an actual coffee grinder.  When making the actual SAUCE I take 1/3 C of this mixture and whisk it into 1 C of Almond Milk and about 1/3 C Water.  And then you have your sauce.  I was able to get at least 4 batches of sauce with this dry mix.  It's described my many as a vegan equivalent to the dry mix in boxed Mac & Cheese! 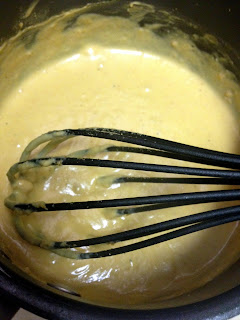 So if I was able to get at least 4 uses out of this dry mix - the serving sauce on the cashew part - is between 69 cents and $1 - if the 1 pound of cashews cost $11 to $16.  I know this has been one HUGE blab fest about the cost of cashews and serving sizes but I thought it was interesting.  This will NOT make me stop trying other Vegan Cheese Sauces, flavors, mixtures, etc. but it's certainly something to keep in mind when the bank account it lower than usual.

I will say that it tasted quite good.  It's not a sharper cheese sauce like some of mine are but it more than gets the job done.

In this photo you can see what it looks like as I whisked!  Yes, I know, I'm a messy cook!

What do you think so far?  I have more photos! 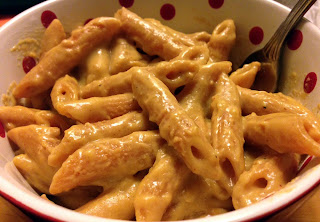 In this attempt - the same one as above - I used a tomato based penne pasta.  It was pretty fabulous!  In the photo below I added some Turmeric to the dry mix or even while on the stove top heating and thickening.  It made it more orange/yellow.  I used organic pasta.  The elbow variety of course.  I topped with Wildtree Dill.  It was YUMMY.  At first I thought that there was a lot of sea salt in this but it worked.  And if you think about salt/sodium in those boxed powders it probably levels up! 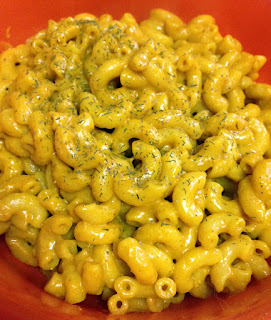 Here's the recipe I used - including my own alterations...

I put all of these ingredients into a blender/grinder until powdery.

Whisked on low to medium heat until desired consistency is reached.
Posted by Jennifer at 6:22 AM