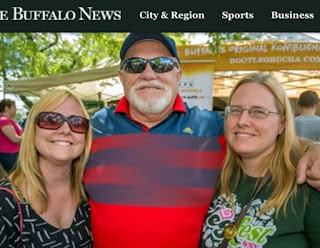 This was the 3rd annual WNY VegFest in Buffalo, NY.  It was at a different location this year...Delaware Park.  Each year my sister and I go and make it a Sisters Day!  My sister is NOT veg but likes to try all of the veggie stuff!  This year my parents came a long!  This is a photo of me, my dad, and sister!  We made the Buffalo News (Website)!  I'm originally from WNY and it's always nice to go back and visit!  Afterwards we attended my cousins daughters graduation party! 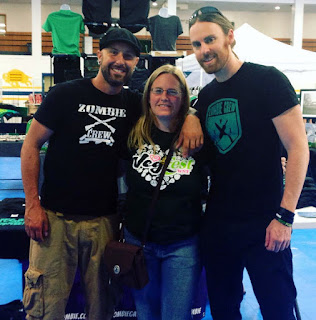 For the 3rd year in a row I was able to meet up with the Vegan Zombie guys!  I didn't think they were going to be there this year but they were able to go at the last minute!  Jon and Chris are always AWESOME!  I bought one of their hoodies this year!  The first year I bought a cookbook and a t-shirt and last year I bought another t-shirt of theirs!

Chris also gave me one of their rubber bracelets!  You can see the one I am talking about on Chris's left arm.

The VegFest t-shirt I was wear in these photo's was from last years VegFest.  I'm hoping to attend the Erie VegFest in September if all works out, too! 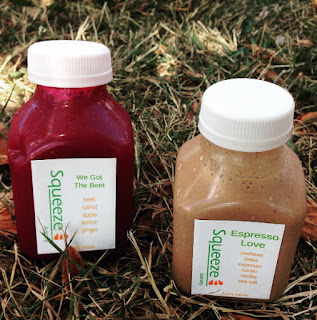 There was a new juice place this year!  Squeeze Juicery and their juices are AWESOME!  Since my parents have been getting into juicing when we are able I thought they would get a kick out of these!  For the most part they did!  I will say that Squeeze kept selling out of them so they MUST have been good, eh!?  We went a little crazy and bought several.  Of course everything that we bought that day we shared so we could all sample everything!

First up we have the 'We Got The Beet' with Beet, Carrot, Lemon, Ginger, and Apple.  Then the 'Espresso Love' and that had Cashews, Dates, Espresso, Cacao, Vanilla, and Sea Salt.  I don't think the Sea Salt was necessary - neither did my parents or sister.  We've never been a 'salt family'. 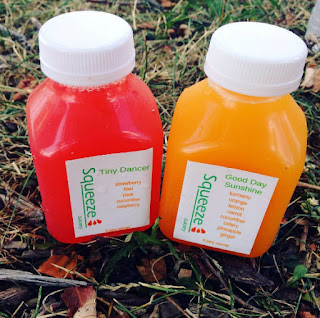 We ended up buying TWO of the Tiny Dancer you see here on the left.  'Tiny Dancer' had Strawberry, Kiwi, Cucumber, Pear, and Raspberry.  'Good Day Sunshine' was the other one and that had Turmeric, Orange, Lemon, Carrot, Cucumber, Celery, Pineapple, and Ginger.

My mom and sister liked the Tiny Dancer the best and my dad liked the Good Day Sunshine the best.  I liked all 4 of them for different reasons.

I will have to make a trip to one of their two locations SOON!  They are in Elmwood and Buffalo.  Check out their full menu HERE. 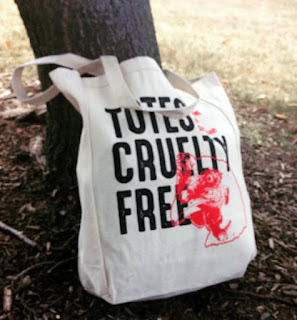 For a couple of years I have been hearing The Vegan Zombie guys talk about Tamerlaine Farm Animal Sanctuary.  So when I heard they were going to be at WNY VegFest this year I had to stop by.  I'm pretty sure they were there last year, too, because I tried their hot sauces.  This year they were selling the hot sauces, their hummus (which my parents bought), and their totes and t-shirts.  I bought one of their totes!

I was able to meet the co-founders and chatted with Peter for quite a while.  SUPER nice people!

They sold out of a lot of their hot sauces and hummus by the time we left the event which was only a couple hours in.  The proceeds benefit the animals at the sanctuary. 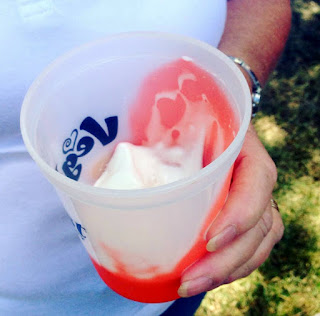 Last year I passed up the vegan ice cream so this year it was on my list of priorities that is for sure!  My mom and I got 2 servings and shared with my dad and sister.  Since we didn't want it in a cone we opted for the cup!  They served them in temperature changing cups that had the VegFest logo on it!  How cool is that!?

I was in my glory at this event because everything at this event is vegan!  It's nice not having to pick apart and read labels for once! 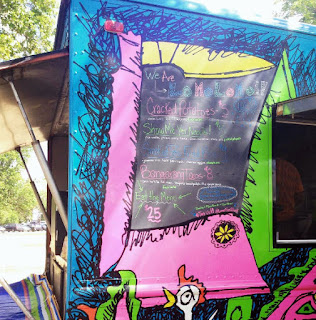 There was at least 1 new food cart this year, too!

You could buy the whole menu for $25.  As tempting as that was - we didn't do it.  My Dad opted for their Bangarang Taco option, tho!

He seemed to really like them!  They had a crispy coated sweet potato, slaw, and a few other things in there topped with a strong ginger sauce.

My sister grabbed a Quinoa Bowl.  I remember her and I had those last year, too!  She really liked them - so much so - she got another one this year.

Mom chose the Veg Noodle Bowl.  It was a large serving for the $7 price tag. 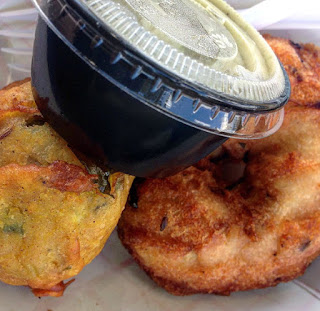 This year it was on my list of priorities to visit the Indian Food Area and I was able to!!!

The establishment was called Dosa Place and it featured South Indian Cuisine.  I really like India Food but I wanted to try something I had not had a lot of experience with.  I opted for the Bonda and the Vadai.  The Bonda is a Potato Fried Ball with onion and spices.  It was great!  The Vadai was basically a savory lentil donut of sorts.  That was terrific, too!

I was surprised that my mom liked the Vadai, actually.  My Dad liked everything he tried that day!

My mom and I visited the Love Beets booth and tried all of their beet samples.  There was a BBQ that was nice - subtle.  My mom really liked the White Balsamic beets.  My mom LOVES beets!  Her and I do - my sister and dad don't care for them generally.

Last photo is the one chat we attended.  It was a group of families that rescued dogs from the Korean Meat Market.  Their stories were heart wrenching!


There are so many other experiences that we had that day!  And so much more food, too!  I remember my parents getting some Vega and Garden of Life Samples and my dad making smoothies the next morning!  I will be giving him some of my protein powder supply soon!  I'm thrilled he enjoyed them!  My dad also bought some Sunflower Seed Butter!  Wheatberry Bake Shop from Snyder, NY, was there and was selling a Vegan Pizza and it was WONDERFUL.  The owner was so nice!  We also grabbed a Lemon Basil infused water from them which gave my mom the idea to start doing that at home with all of the basil she has growing!  It was another great year at WNY VegFest!  I'm so excited that my parents came with us this year!  I hope to attend the VegFest in Erie next month, too!  Fingers crossed it all works out!
Posted by Jennifer at 5:45 AM