Winter was Spring & Spring is Winter 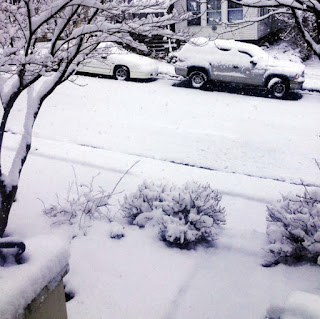 This is what I woke up to Saturday Morning.  But this isn't the first snow we have seen in the last few weeks!  Today it's raining but we might see some more snow over the next few days.  Not that much, really, but let's face it...it's SPRING!  Why isn't Spring acting like Spring?  Probably because Winter didn't act like Winter, either.  Oh well.  I've been thinking of doing a cleanse or detox of sorts and have been thinking of how to go about it.  I think FIRST what I might do is omit breads and pastas as I have been using it as a crutch lately and feel those are the two items that have added a few unwanted pounds.  I'm not going to go overboard, here, I really just want to shred 5 pounds...10 at the very most.  I seem to feel better at that weight. 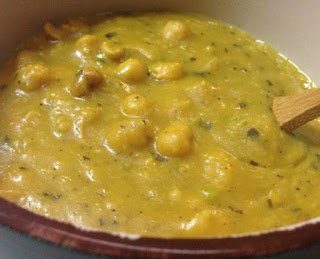 I think I will try and NOT consume pasta or bread (unless it's sprouted bread like Ezekiel because I have a half loaf left).  I've also been thinking about doing soups, salads, for dinners and nearly Raw Til 4 up until then.  That may be a real challenge for me some days, however. More on that in the coming days.

In the meantime - here's something I made last night - it's a twist on Da(h)l.  Actually it started off as a Da(h)l and then I added Chickpeas and a handful of Cashews, too!  Mostly because I under estimated the amount of red lentils I had on hand prior to cooking.  So I guess this would qualify as an EATING FROM YOUR PANTRY Meal.  I sampled some last night when it was finished and it turned out good!  It will be my dinner this evening, too!