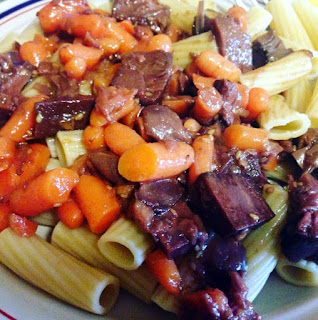 I have to admit this sort of freaked me out!  Even my mother said it looked like 'meat' you would put in a stew.  It's not.  It's actually Jackfruit!

My mother is not a vegetarian and she sampled a little bit of this Sesame Ginger Teriyaki Jackfruit and thought it tasted like meat, too!

Normally I am not a fan of meat alternatives or fake meats but I think because this is straight up fruit based it seemed to be better than a lot of the others you see on the market.

It came as a packet that you could heat and serve and I just added carrots to it and poured it over pasta. 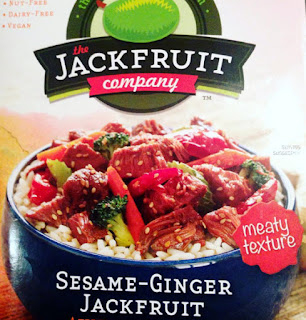 Here's a photo of the package!  It's from the Jackfruit Company.  It's Nut-Free, Dairy-Free, and Vegan.  It's the Sesame Ginger flavor.

Overall it was a very impressive product.  I don't think it's something that I would eat everyday as it was a little more salty than I like...but it had a good flavor.

The reason I bought it was purely because of the Jackfruit!  It's rare to find Jackfruit anything around me!  I've only ever had Jackfruit flavored things and have also had dried Jackfruit that I bought from The Raw Food World.  This was a nice change and certainly gave me some ideas as to what to do with it if I can find some down the road.  Other ideas that I am drawn to are Jackfruit Tacos and Jackfruit Sandwiches (instead of Pulled Pork Sandwiches), for example.
Posted by Jennifer at 12:48 PM