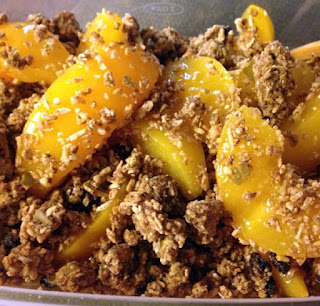 Here's another 'Eating From Your Pantry' sort of post.

A while back I had bought some canned peaches.  Then - when I bought more from The Raw Food World - I used to buy some of their Living Intentions 'Cereals' which were basically granola.  I found an unopened bag of one of them in my cabinet.

I decided to pour some over the peaches and have it as a snack the one night.  It was pretty darn good!  The Granola was Ginger Chia.  It also had other superfoods - and as you can see - shredded coconut. 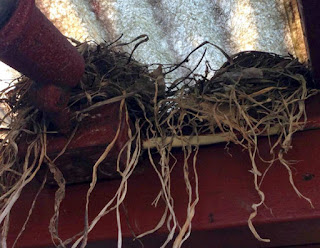 In our backyard we have a cemented area and above it an overhang (kind of like a porch but not really).  It has a spot light which you can see part of here in the upper left hand side.  Near the rafters you can see 2 nest side-by-side!  The one on the left is from last year and the one on the right is from this year!  I don't know if I have ever seen 2 different nests that close to each other - naturally!

Nature is COOL isn't it? 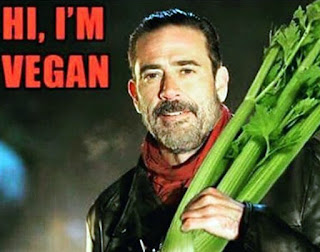 One thing that I haven't talked about much here on my blog is that I am a fan of 'The Walking Dead'.  Then again...MANY...people are!  I was joking with a friend about how NEGAN sounded a lot like VEGAN and what do you know...I started seeing Vegan Meme's on Instagram shortly after.  In case you don't follow the series,,,NEGAN was FINALLY introduced in the season finale a few weeks ago.  In the comics - from which the series is based - the character is known for being a villain and carries a barbed-wired bat that he named Lucille and uses it as a weapon.  Here...the bat is replaced with celery! 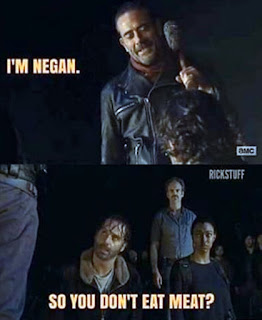 Here's another Negan Vegan Meme I recently came across!  How funny!

SPOILERS below & possibly in comments...

So...who do you think 'met Lucille' if you know what I mean?  Post in comments!  I will let you know my thoughts there as well (in the near future.)

The actor who plays Negan is Jeffrey Dean Morgan.  I have been a fan of his for a while.  Eventho he's a 'bad guy' in this - I am looking forward to seeing what he does with the role.

In the comics (which I haven't read but have heard a lot about) Glenn is the one that 'meets Lucille' but the TV series doesn't necessarily follow the comics verbatim.

REMINDER!!!!  MWM (MidWeek Munchies) is BACK!  Clickable link and Link-up on the upper right hand side of my navigation bar!  Looking forward to your posts!!!
Posted by Jennifer at 4:49 AM