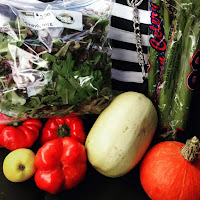 Yesterday we brought back MidWeek Munchies so I thought I would do another post today about it.  If you would like to participate the current link-up is active THRU next Tuesday the 13th!  Read more about it HERE.  In this first photo you will see it's all produce!  I stopped at my favorite produce stand (Lindell's Hatch Patch) and grabbed a few things...Spring Mix/Greens, Celery, Red Bell Peppers, Spaghetti Squash, Kabocha Squash, and I even grabbed a FREE SAMPLE of one of their newest apple offerings...it's a Blondee Apple.  Kabocha Squash and Blondee Apples are new-to-me so more on that soon! 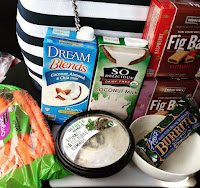 I then ran to Walmart and noticed these vegan options!  Amy's Kitchen Vegan Burrito (might be my dinner), Hummus (my lunch), Organic Carrots (my Lunch), 2 types of Fig Bars (I LOVE these and now they carry the VEGAN Seal!), Coconut Milk, and I couldn't pass up a new-to-me TRIO of non-dairy milk (Coconut, Almond, Chia).  I also bought a small cutting board and pairing knife for my car/office/Lunches-on-the-go!

Also part of my lunch today was 2 of the Red Peppers from the first photo!  YUM! 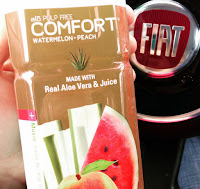 One thing I forgot to mention earlier this week is this new-to-me beverage my father gave me.  It's Alo Watermelon Peach and it tastes just like a smoothie!  YUM!  I've had a few of their other flavors before but I have to say this is by far my favorite!

Yes, I have been driving around a lot again and eating and munching on-the-go so you can see I'm in my Fiat while taking this photo!

Have you tried any of the Alo drinks yet? 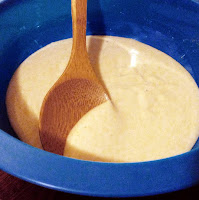 Last night I had the hee-bee-gee-bees and need to make something in my blender to snack on.  I ended up making this...it's close to a Vanilla Pudding or some sort of Cake Batter Cashew Cream type thing.  It was pretty yummy!  I submitted the recipe to The Raw Food World NEWS Site and their Recipe Section so be on the look out over there.  It contains the following ingredients: Cashews, Almond Milk, Organic Vanilla Extract, Coconut Butter with Coconut Sugar, Agave Nectar and/or NuNaturals Vanilla Stevia, a pinch of sea salt. 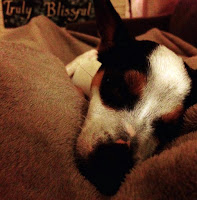 After having a little bit of this pudding last night I spent most of the evening doing research and writing.  Cricket sat at my feet when I was at the computer.  She was so patient - which isn't usually her strong point.  So I laid with her for a while before falling asleep.  She seemed to really LOVE it.  Paco was a bit of a slug last night because I had to give him a pain pill for his knees/hips.  He was still running around but you could tell he was like a penguin on slick ice half the time.  Riley was lazing-out, too!

Remember there is still time to LINK UP on this week's MidWeek Munchies - CLICK HERE!
Posted by Jennifer at 11:31 AM