I'm digging thru the archives for this one!  Blueberry Hemp Smoothie!
I may be cheating with this since it's not a NEW recipes it's one that I have used before.  Forgive me!

I have been so jazzed about Vegan MoFo this year that I have nearly forgotten to post a few other things I wanted to share with you so here it goes!  First...a random Kombucha!  I know Vegan Peace will appreciate this!  I have been wanting to make my own but still haven't pulled the trigger on it yet.  I'm still pretty nervous!  But I learned a lot from YouTube and my buddy Opal about making your own...I just haven't!  I know...I know...stop procrastinating!  Just DO IT!  One of these days I will...just not today!  I will say I was surprised at how tasty this bottled flavored Kombucha was!  Raspberry and Lemon!  It was about 60/40 Raspberry/Lemon flavor ratio!  It had that lightly carbonated tingle but wasn't vinegary...the last bottled Kombucha I had was like vinegar. Another thing I wanted to share in this post is what we did this past weekend.  It was a nice 3-day weekend!  We went camping and met up with some people on the board that hubby belongs to as well as being able to see some friends we haven't seen in about a year.  It was actually former band mates and friends!  It was FUN and I would love to do it again!  We hope to meet up with our buddies Tom and Nicole for dinner in a month or more (before the snow starts flying again).  I can't believe it's that time of year again...time to wonder when the snow is going to start in again...sigh... 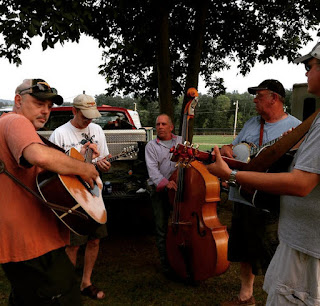 Here's a pic of the band.  Well, it's a reunion photo of sorts since they no longer play on a regular basis, I guess.

In case you are new to my blog...my husband's former band(s) were of the Bluegrass variety.

The 5 you see here made up the band Northern Railroad Bluegrass.  My husband is on the far right...then there is his uncle, our buddy Joel on base in the middle, then Tom on Mandolin with the white T-Shirt, and Bud on the far left with the other guitar!

I took some video but don't know if it came out or not.  It was fun and I hope they get together again soon!  I miss the music and friendship!
Posted by Jennifer at 3:00 AM