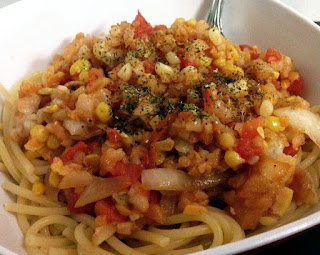 Today is Retro Recipe Day during Vegan MoFo and I had no idea what I was going to do until I did it!

I figured it would be a neat idea to go back to the Great Depression era for this one.  I remember doing a bean dish years and years ago for another blog and for the life of me can't find a photo of it.

I thought this was a great idea because a lot of people assume vegetarian and vegan meals are expensive (which couldn't be farther from the truth if you do it right) but since I am trying to pump my bank account up again I thought I would use as much from my pantry/cupboard as possible without having to go to the grocery store!  It was a success with this dish!  I worked off of what I had on hand so it technically didn't cost me anything (new).  This idea was very LOOSELY based on a number of posts I found online including an older lady by the name of Clara who (I'm told) released a Great Depression Recipe Cookbook.

She suggests cooking a potato, add salt and pepper, a can of peas, an onion, and combine...then add some tomato sauce and you're DONE.  This in itself could be a vegan recipe, too!

But...For MY recipe this is what I did...1/4 C corn that was frozen and a small very sweet onion until soft in a frying pan or cast iron skillet.  Then I took 2 Potato Patties I had in the freezer and added them to the cast iron skillet until light brown, cubed them up and added 1/4 C diced tomatoes and mixed well.  I had some noodles on hand and threw this mixture on top of the noodles and there you have it!  It's savory, sweet, juicy, full of flavor, oil free, vegan, and I only used items that I already had on hand.  If you are wondering what you see that is GREEN on top in the photo...it's Cayenne flavored Kelp Sprinkle.
Posted by Jennifer at 2:00 AM