Sometimes blog posts just write themselves, don't they?  Well, yesterday I was lucky enough to visit a place that has been on my bucket list for YEARS.  That place was Strong Hearts Cafe in Syracuse, NY.  It's a 100% Vegan Restaurant.  And YES my sister and I drove almost 4 hours just to have lunch.  Okay - Okay...maybe we did a few other things to but Strong Hearts was the main reason for this trip!  I'm so blessed that I have a sister who would go with me on this journey.  As I have said before she's not vegan or vegetarian just a really wonderful sister!  So get ready because not only will this be a LONG post but I will incorporate both a review of my experiences at Strong Hearts Cafe AS WELL AS tie it into today's Vegan MoFo prompt which is "What [insert well known person] would eat if they were vegan."

Here's what Gambit would eat if he was vegan.  First I will start of by explaining who Gambit is.  For those of you who don't know he's an X-Men Character.

Gambit is also known as The Ragin' Cajun at times.  His powers are: Kinetic energy control and manipulation, Static generation, and he's a Skilled card-thrower.  Being a skilled Card Thrower I had to point out one of the nice touches while visiting Strong Hearts Cafe.  Once you order they hand you a card as seen above to determine your order and table for delivering your food.  (Keep reading to see how I connected the dots with the Ragin' Cajun reference, too!)

Taylor Kitsch has played Gambit in a few movies already and when I read THIS ARTICLE I knew I had to include him in this post.  If you don't know Taylor Kitsch he's also starred in the movie John Carter AND Friday Night Lights!  I also have to confess that X-Men is my favorite "Superhero" and/or "Comic Book" series that has been made into movies!  I LOVE the characters and make it a point to watch the movies when a new one comes out!  So for today's Vegan MoFo Challenge I would say Gambit and/or Taylor Kitsch would be my choice to blog about.  I think if he were a vegan he would like what I had for my MASSIVE meal while visiting Strong Hearts Cafe which was a Caramel Cookie Dough Milkshake, Cajun Seitan Sandwich, and Pumpkin Spice Walnut Cheesecake! 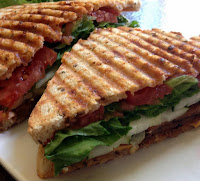 First up...the sandwich!  Take a look at this bad boy!  Cajun Seitan Sandwich!  I was lucky enough to meet one of the owners/founders of Strong Hearts Cafe JOEL.  He was super nice and I chatted with him a bit as well as one of the other employees.  Both were great!  I knew I wanted to try one of their Seitan sandwiches because I don't really eat a lot of Seitan.  When I asked both Joel and the other girl working which of their Seitan Sandwiches they thought I should get they both quickly said CAJUN.  That settled it for me!  Cajun it was! 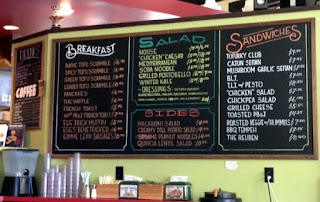 I'm so glad they suggested it - the sandwich was AMAZING!  It had just the right amount of heat to it!  And they certainly do NOT skimp on ingredients!  Their sandwiches were jam-packed with healthy contents!  I mean LOOK at these photos!  YUM!  The Cajun Seitan Sandwich had Cucumbers, Lettuce, Tomato, Cajun Seitan, Cheddar Cheese (I think they use Daiya), and I believe it was on a rye panini type bread!  Because this was a fantastic Cajun flavor I think the Ragin' Cajun himself would appreciate this vegan sandwich! 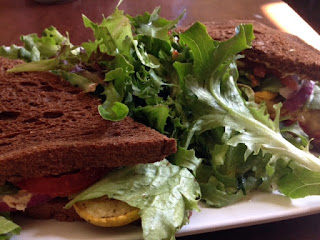 Next up...is this wonderful Milkshake!  It seemed like Strong Hearts Cafe had about a billion different flavors of vegan milkshakes - okay - that might be an exaggeration - but - they did have A LOT!  It made it difficult to decide but I did it!  I went with the one call Farm Sanctuary which is of course named after the farmed animal sanctuary in Watkins Glen, NY.  It was Caramel Cookie Dough flavor.  And is was out-of-this-world!  My sister had a Peanut Butter/Chocolate flavor and I had a sip of that, too, and it was amazing!  My sister LOVED her milkshake AND sandwich.  She opted for the Roasted Vegetable Hummus Sandwich. 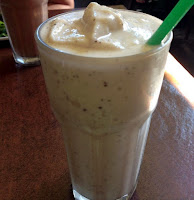 As you can see we both chose the "greens" as our side but you could choose 'chips' if you wanted to as an alternative.  My sister said that the hummus they used for her sandwich was a Cilantro flavored and she thought it was terrific!  The greens had a light Italian Dressing flare to it, too!  I wanted to make sure that I pointed out the MASSIVE size of these sandwiches.  Now...I didn't take a tape measure to them but they were comparable to the size of an iPad.  And not the newer, smaller iPads...the earlier version that were larger.  Just to give you a visual!  But that's NOT ALL...we still haven't talked about the impressive cheesecake...don't worry...I will...keep scrolling! 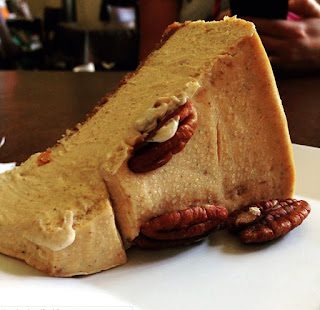 As for the Vegan Cheesecake I KNEW I had to have at least one piece!  After all I LOVED cheesecake before dropping dairy and it seemed the one place I knew of in the region (Pizza Plant in Buffalo) never seemed to have it available the few times I have dropped by!  Anyhow...check OUT this large slab of Vegan Cheesecake GOODNESS from Strong Hearts Cafe!  When I order a slice I thought it was just going to be regular cheesecake but vegan but BOY was I wrong!  Apparently depending on the time of year they may do different types of cheesecake.  This one was a Pumpkin Spice topped with a few large Walnuts!  WOWZA!  And YUMMO! So YES my sister and I had a wonderful time at Strong Hearts and everything was AMAZING.  I was going to try and grab some stuff to go but after we were done eating I was so stuffed I couldn't even think about eating anything else so instead I bought one of their t-shirts!  Everything was affordable.  Everyone was so nice.  This place is a Utopia of sorts and I would urge everyone to go if they can!  Gambit/Taylor Kitsch if you are out there - GO - GO to Strong Hearts Cafe!  You'll thank me later!
Posted by Jennifer at 9:59 AM