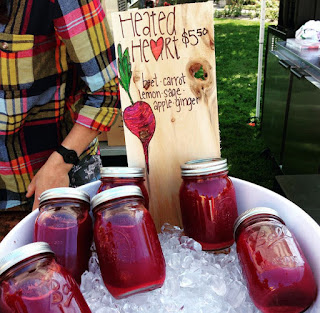 Today's post is all about the juices and food we had at WNY VegFest on Sunday!  Be sure to scroll down for the speakers and other photos from yesterday!

As for the first photo in this post I HAD to give major shout outs to the folks at Ashker's Juice Bar in Buffalo!  They really pumped up VegFest full of color with their juices!  It was so awesome seeing so many people walking around with fresh juiced juices!  I really hope more juice business start opening up in the region!

Check out this first one...Heated Heart...with beet, carrot, lemon, sage, apple, and ginger!  It was SO tempting...I almost bought one but decided on a different one which you will see in a moment. 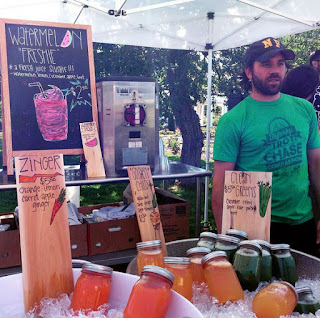 The one on the right of this photo is the one I opted for it was called Clean Greens and it had cucumber, kale, celery, apple, parsley, and mint!
It was FAB.

As you can see in the back there is a sign for their newest addition and I just HAD to get that, too!  That was the Watermelon Slushie and it had Watermelon, Lemon, cucumber, apple, and beet and it was AMAZING! 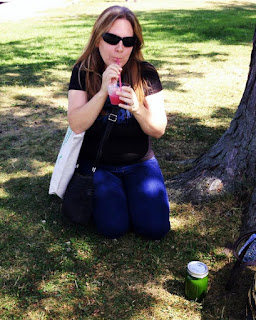 Here's a pic of me with the Watermelon Slushie with my green juice in tow.  We saved that for the upcoming speaker.  My sister and I both had some but I probably drank 75% of it to her 25%.  It was great!

My sister doesn't like watermelon - actually it doesn't like her.  My father has the same problem.  Not me...I could live off of it.  My mom and I usually treat ourselves when watermelon season is here.

We were sitting in a grassed area re-grouping before the speakers.  What you can't see in this photo is that we were watching and listening to one of the musicians on their outdoor stage.

The weather was great this year and I really think there were at least 5 (if not 10) times the amount of people at the event this year! 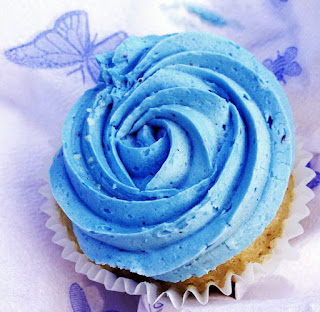 This was one of the first things we had when we first got to VegFest!  It was from a local bakery D & M Confections!  This is their Vegan Oatmeal Blueberry Banana Cupcake!  It was YUMMY!  My sister and I split this, too!

I don't usually eat sweets mostly because there are no local vegan dessert options near me and I'm certainly NOT a baker!

D & M Confections is located in Tonawanda, NY, and about 2 hours from where I live.  It's not a 100% vegan bakery but at least they have options, right?  I will say that THIS option was awesome!

The color was out of this world, too! 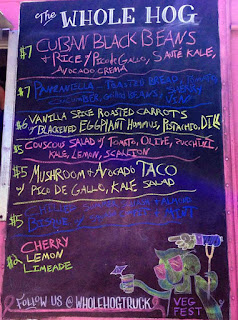 Taking a look at the Food and Food Trucks this year!  This place was there last year, too!  I was tempted by many of their menu items and probably would have ate more if I could but it seemed like we were eating and drinking all day!

The BEST part - at VegFest - everything is VEGAN - so I don't really have to think too much about what I can eat!  YAY!  I know this might sound silly to some people but where I live that isn't the case often!

There was at least 1 food truck that was missing from the previous year but there were many new food vendors this year which was AWESOME!  And some of them weren't even trucks but tents regardless the options were terrific!  There was a stand that did vegan nachos and another that had vegan ice cream.  I would have gotten some ice cream but didn't want to walk around and eat a cone. 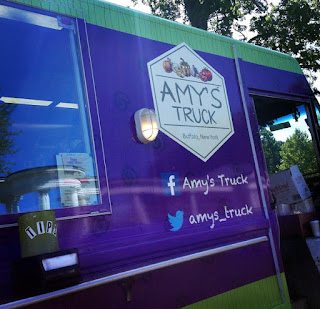 Amy's Place in Buffalo was there with Amy's Truck!  Years ago I visited Amy's Place and LOVED it!  The truck stop was packed so we didn't grab food from there but I want to visit their location again, soon!

There were representatives from Strong Hearts Cafe in Syracuse, NY, at the event and I wasn't able to meet Joel but I saw him there!  My sister and I are planning a day trip to Syracuse with Strong Hearts Cafe in mind and top priority!  I'm sure we will find other things to do while we are there, too!  It's about a 3 and a half hour drive but I know it will be FUN! 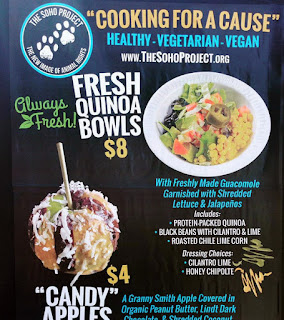 One tent we did stop at for food was this place!  The SoHo Project!  The one guy was telling a fellow festival go-er that it was a proof of concept type food business.  The business helps their non-profit and the non-profit is to help animals.  I loved the idea!

My sister and I each had a quinoa bowl from here which you will see mine in just a moment.  We both opted for the Cilantro Lime Dressing.  Mine with WITH jalapenos and my sister's was WITHOUT.

My sister said it was one of the BEST quinoa bowls she's ever had!  In addition to quinoa it had black beans, avocado, corn, lime, cilantro, and lettuce!

We didn't get a "candy" apple but they sounded wonderful! All I want to eat now is variations of quinoa bowls!  They were so tasty!  I do make them often so it's not that much of a stretch to do them but it's nice to try other people's bowls, too, right?

So as you can see we had plenty to eat and drink during WNY VegFest!  It was bigger and better than last year and I know it will just continue to grow and I'm so excited about that!

I still have at least one more blog post I will be doing about VegFest so stay tuned!  I want to share many of the vendors that were there, too!
Posted by Jennifer at 6:20 AM