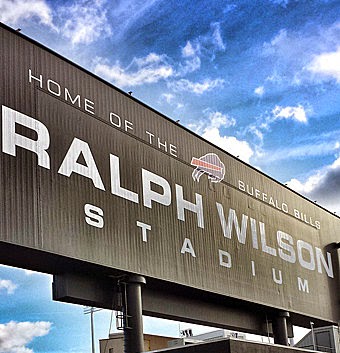 Last week I posted a photo that my father sent me from the Buffalo Bills Game.  It had been a while since I was able to attend a Football Game.  Later in the week my parents asked my husband and I if we wanted to go with them on Sunday to the Buffalo and Minnesota Game.  We said yes and off we went!  I was able to take a bunch of photos - most of which turned out well.

If you are not familiar with the Buffalo Bills then you may not know that our long time team owner Ralph Wilson passed away earlier this year.  The stadium was renamed after him prior to his passing but this is the first time I had been able to get a pic of this sign. 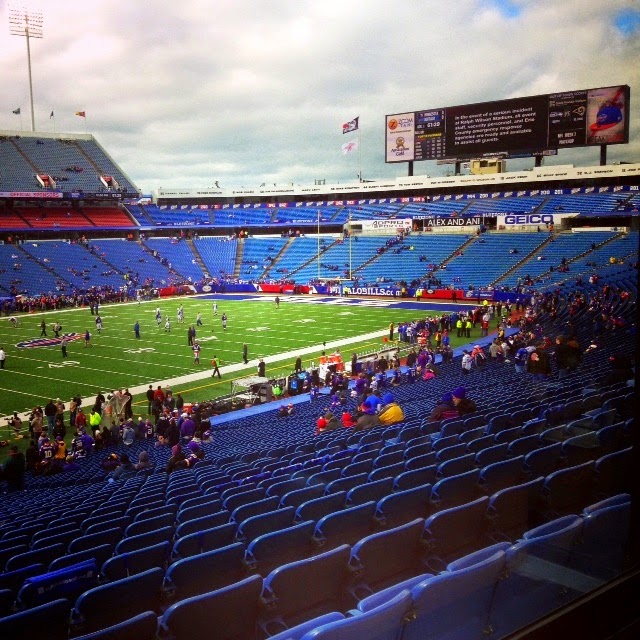 Because we had a 2+ hour drive we tend to get there earlier than most people.  We were in one of the suites and I took this 2nd photo prior to the game...that is why there aren't many people in the seats YET.

It was a sold out game.  It was chilly yesterday - but since we were inside the temperature was very comfy (minus the air conditioning blasts on occasions!)  I was able to gnaw on some nachos with 3 different kinds of salsa but there were non-veg options for the other people enjoying the game as well.  I ate a little something before we got there because I know I don't eat much when I do go. 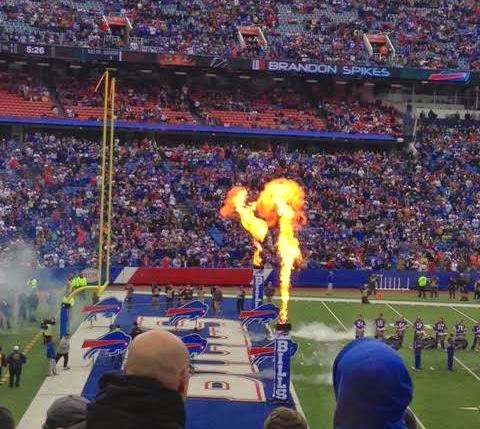 We didn't do much Tailgating prior to the game but we figured there was enough people out there making up for us NOT doing so.

This 3rd photo is part of the pre-game festivities on the field.  I will say this is the first year that I've attended a game without seeing the Buffalo Jills (the teams former Cheerleaders).  There are no long cheerleaders for our team due to social and court issues the past few years involving Sexual Harassment and other accusations. 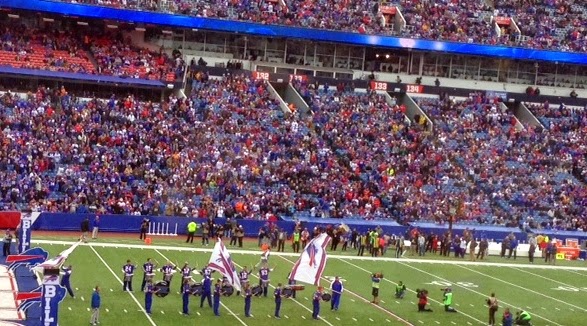 Now that the Cheerleaders are not there to get the crowd pumped up they have added The Stampede which is a really awesome Drum Line.  I enjoyed watching and listening to them but wasn't able to get great photos because they favored the other side of the field more than ours.  Another thing I liked was the flags (Color Guard) prior to the game - but I'm partial because I was in the Color Guard when I was in High School.  I wish they had more of them. 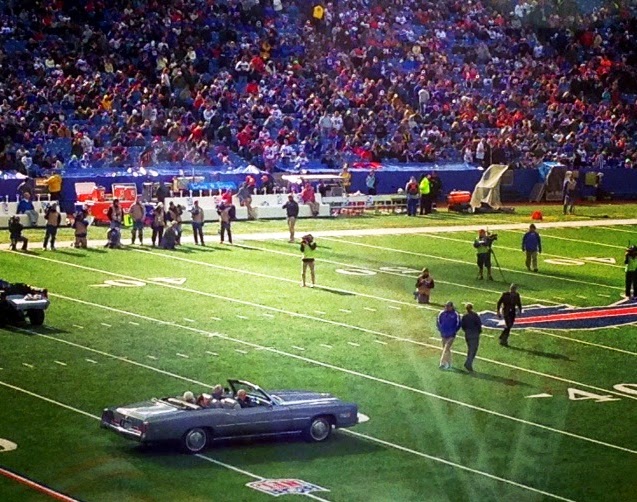 During half time the highlighted the career of our legendary announcer Van Miller.  Van Miller's radio (and TV) career spans 60-some years.  He's a MAJOR part of sports history in Western New York.  He's in his upper 80s now and his health isn't great.  He was the 29th person on the Wall of Fame and the recognition and unveiling took place yesterday during half time.  I'm so excited to have seen it happen right in front of me.  They brought him out in this car right on to the field so he didn't have to walk or stand.  It was pretty classy! 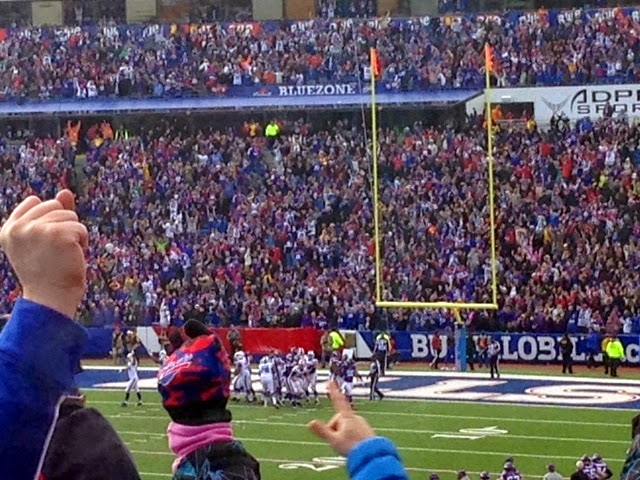 The majority of the game was a snoozer - too many flags, penalties, and turn overs.  BUT...then it happened...with about a minute left...the game FINALLY turned around...and it was awesome...and looking back the wait was totally worth it!

And the craziness continued into the post-game and walk back to the car! 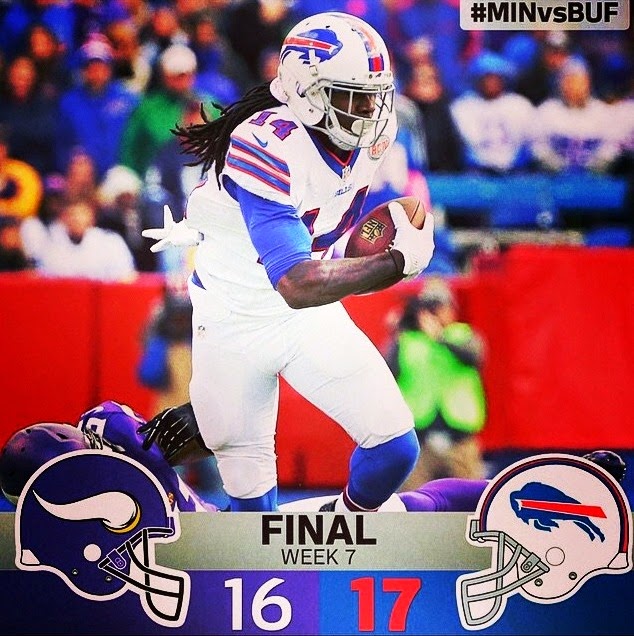 This was one of the many photos being posted on Instagram.

YUP!  I finally attended a game where MY team actually WON!  It wasn't pretty but it was still a win!

I had a lot of fun with my husband, mom, and dad!  I'm so excited they invited us!

Looking back I should have taken video on my phone on the way back to the car.  The crowd was CRAZY!  And speaking of CRAZY...I can't help but put this photo.... 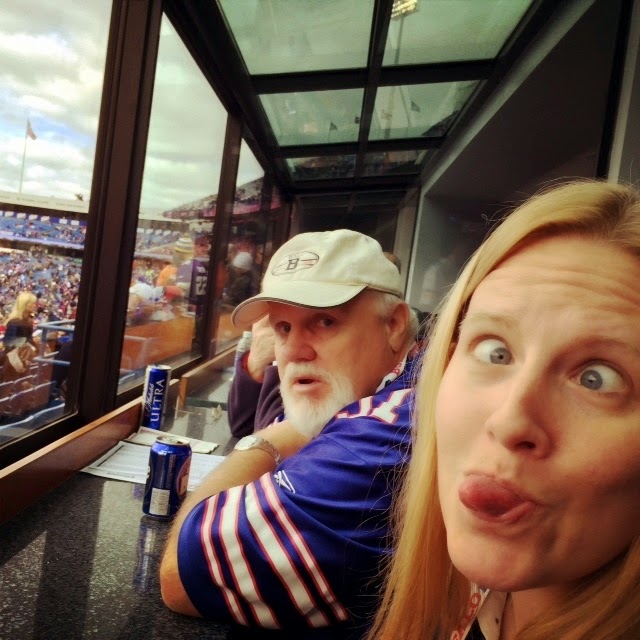 My husband took the pic and told me this morning that he changed it to his profile photo on Facebook.  I guess he's had a lot of comments on it but have 'no idea why'...lol...

I haven't been on Facebook in about 3 months...I guess I just needed a break.  PLUS...I have been enjoying Instagram more, lately!

And that is my father in the background, too!  This was taken in the  middle of the game prior to the BIG PLAY that turned everything around for my BUFFALO BILLS!
Posted by Unknown at 9:02 AM