Pups & Plants of the Weekend

I have two posts today!  Be sure to scroll down for my first one regarding FOOD OF THE WEEKEND.  This one will be a bit longer but it's specifically about Furkids...Pups to be exact...and progress on the plant life at the office.

This first photo my sister took of me with my parents Puppy Lexi.  She's doing really well!  She's a very good girl...very sweet and VERY smart!  She loves to slow dance as you can see here.  Yes, I even got some puppy kisses!  Another thing you may (or may not) notice is that their floor is different.  Yup!  My father totally re-did their kitchen floor in less that a day!  It looks SHARP!  He did a GREAT JOB! 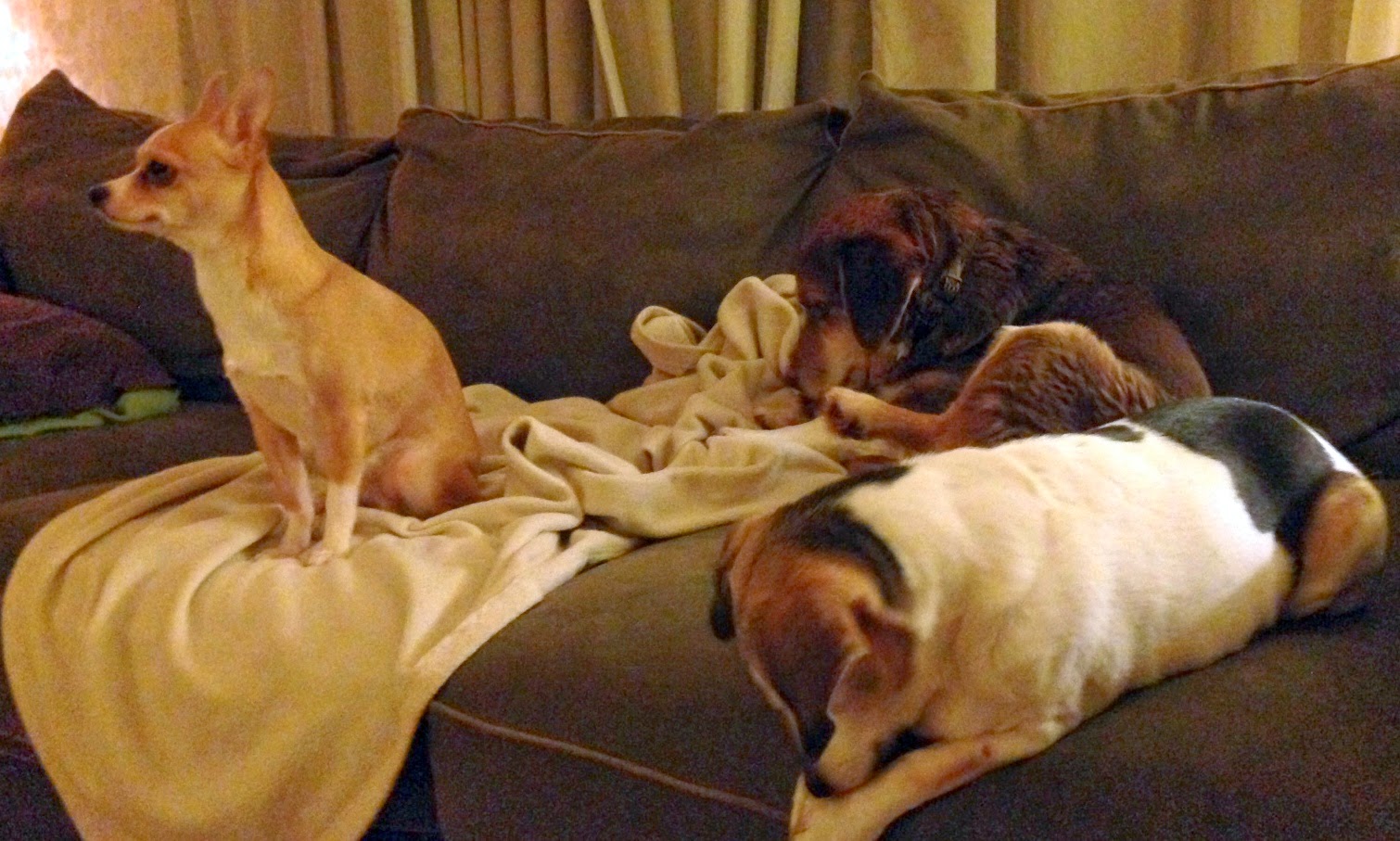 Here's a photo of all three of our dogs - together!  This was shortly after they ate dinner.  One of the things they enjoy doing after a meal is to 'wash' for some reason.  That's what Suzie and Riley are doing anyway.  Paco has his eye on something else in the next room, I guess.

This weekend was COLD...especially yesterday and on to TODAY.  It was only 10 degrees when I parked my car this morning!  The dogs don't like the cold either...it's not just me!  Eventho it was bitter cold at least we had nice sunshine that shined thru the windows! 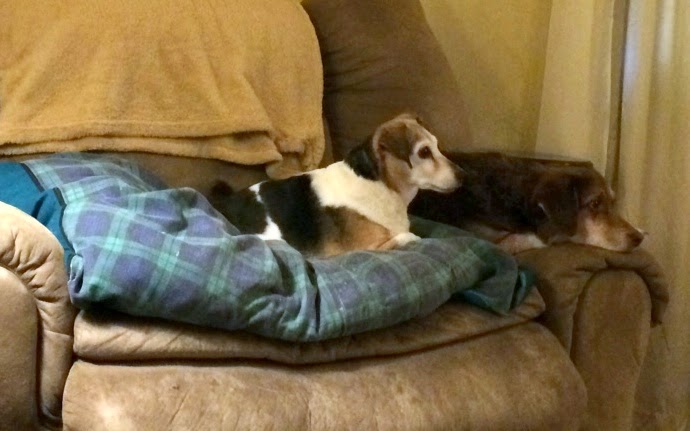 Some sad news from last Friday...my mother-in-law lost her last of 3 dogs.  Wally was a 9 year old Boston Terrier.  He wasn't feeling well Thursday Night or Friday Morning and she took him to the vet.  They found a mass in his stomach that was larger than a softball. She lost her other 2 dogs about a year ago to other cancers, too.  And before that her 1st dog to Mouth Cancer...that dog was also a Boston.  She says she's 'done' with pets and decided to give all of her stuff away.  She wanted us to have some large dog beds and after she cleaned them she gave them to us to bring home.  Both Suzie and Riley LOVE them!  Paco tried to pull the other one around the house until I folded it and put it infront of the TV.  I hope he warms up to it as a bed and not a toy.  Time will tell.  I feel really bad for my mother-in-law - it was VERY hard for her.  MY Mother text messaged me this morning and told me one of their cats was sick so we are waiting to hear back regarding her text results, too!  AND...Charlie has a vet appointment for Friday because he split open that wound on his tail again...I thought it was doing so well, too!  Grrrr! 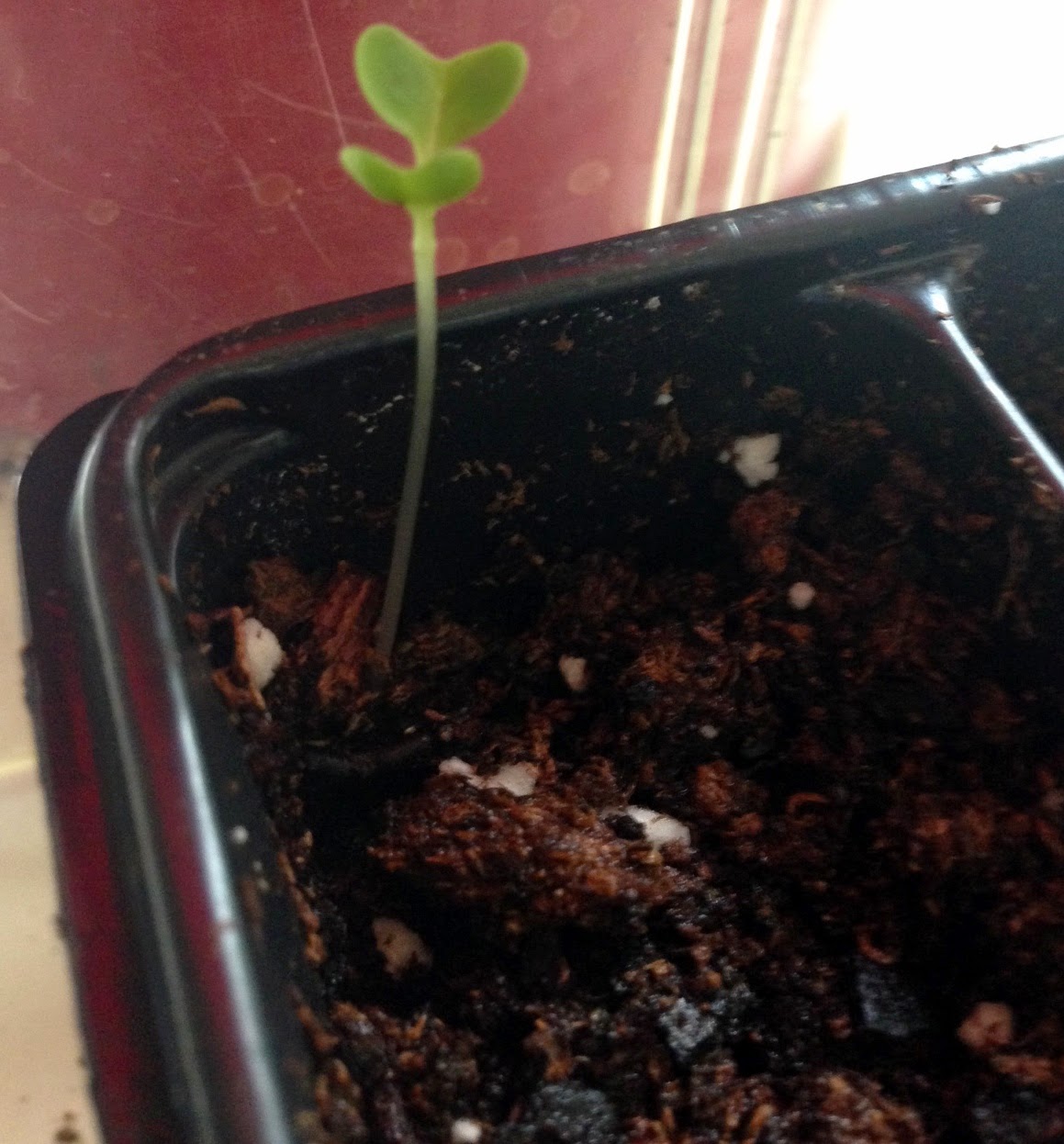 On to the plant and planting news!

We are still rolling along with the Container Garden which will then transform into our Rooftop Garden if all continues to go well!

Here's a photo from this morning!  It's our very first sprout of Brussels Sprouts starting!  YAY!  We thought we would start small and then transplant them if all continued to progress!  We tried about 12 of them, I think.  I will keep you posted on the progress! 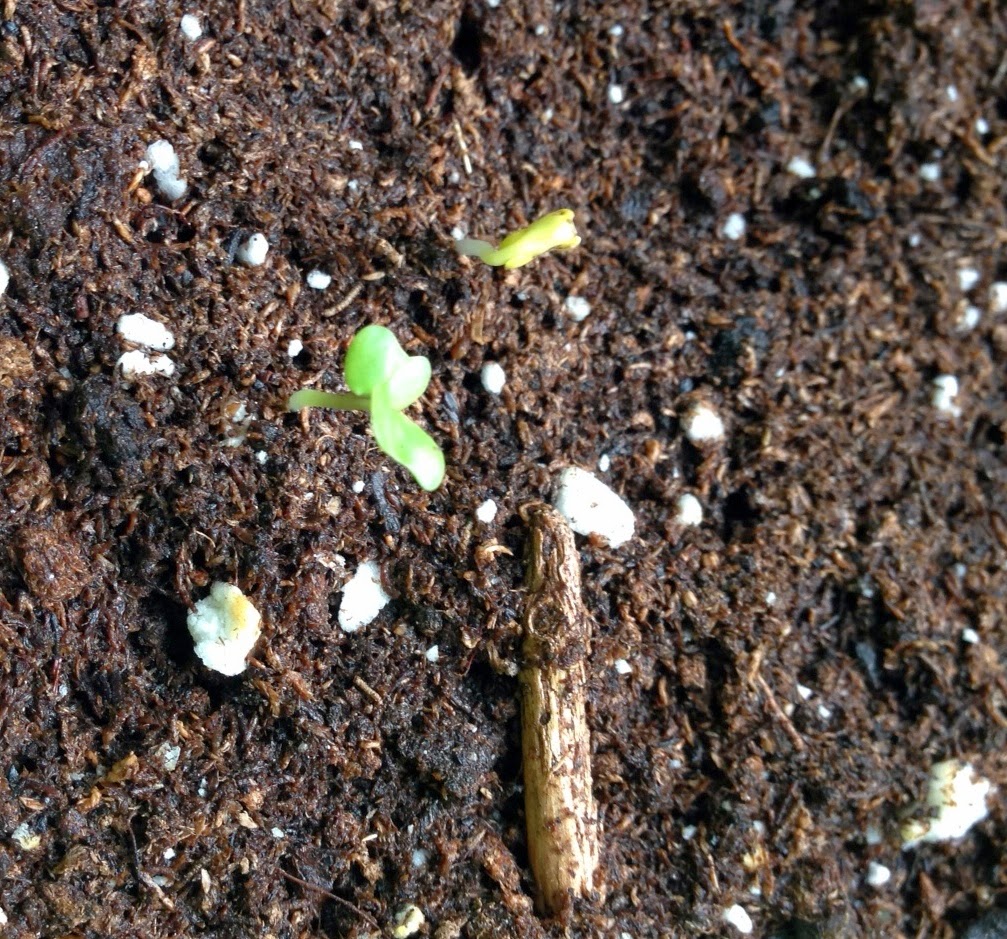 And speaking of 'first time sprouts'...here's a look at the very first signs of life from our Broccoli!  We have the Broccoli started in a 1 and a half gallon bucket.

Now...on to the updates and progress of our "GREENS"!!!

We now have signs of life from all 6 of the 'greens' that we started!  5 lettuces and kale!  Here's a look at the Grand Rapids Lettuce.  I am aware that some of these lettuces we will most likely have to transfer and transplant into another area or space them out a bit more but some of the lettuces are said to 'thrive' in various conditions such as in more confined spaces. 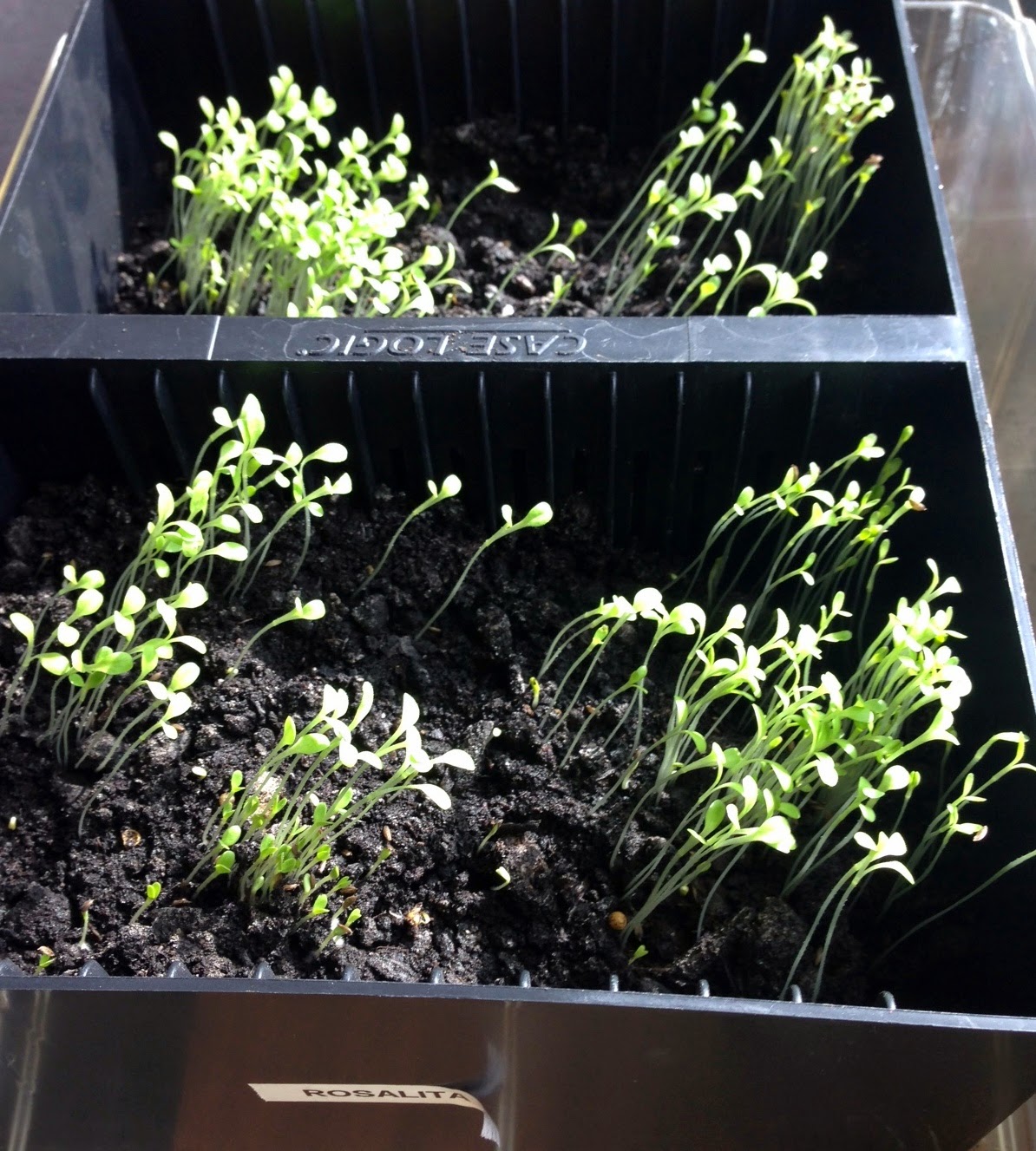 That's NOT really the case with the Rosalita Lettuce you see here.

Rosalita is a 'head' lettuce...so we will have to replant these and space them out better.  Oops!  Live and Learn, I guess, right!?

This is our ROCK STAR so far, tho, so perhaps it will 'transfer' alright.

I just LOVE how it looks like they are reaching for the sun!  I told my co-worker that I thought they were dancing too...she giggled at me and called me a 'hippie'...but from her that is a compliment and fun little joke her and I have going! 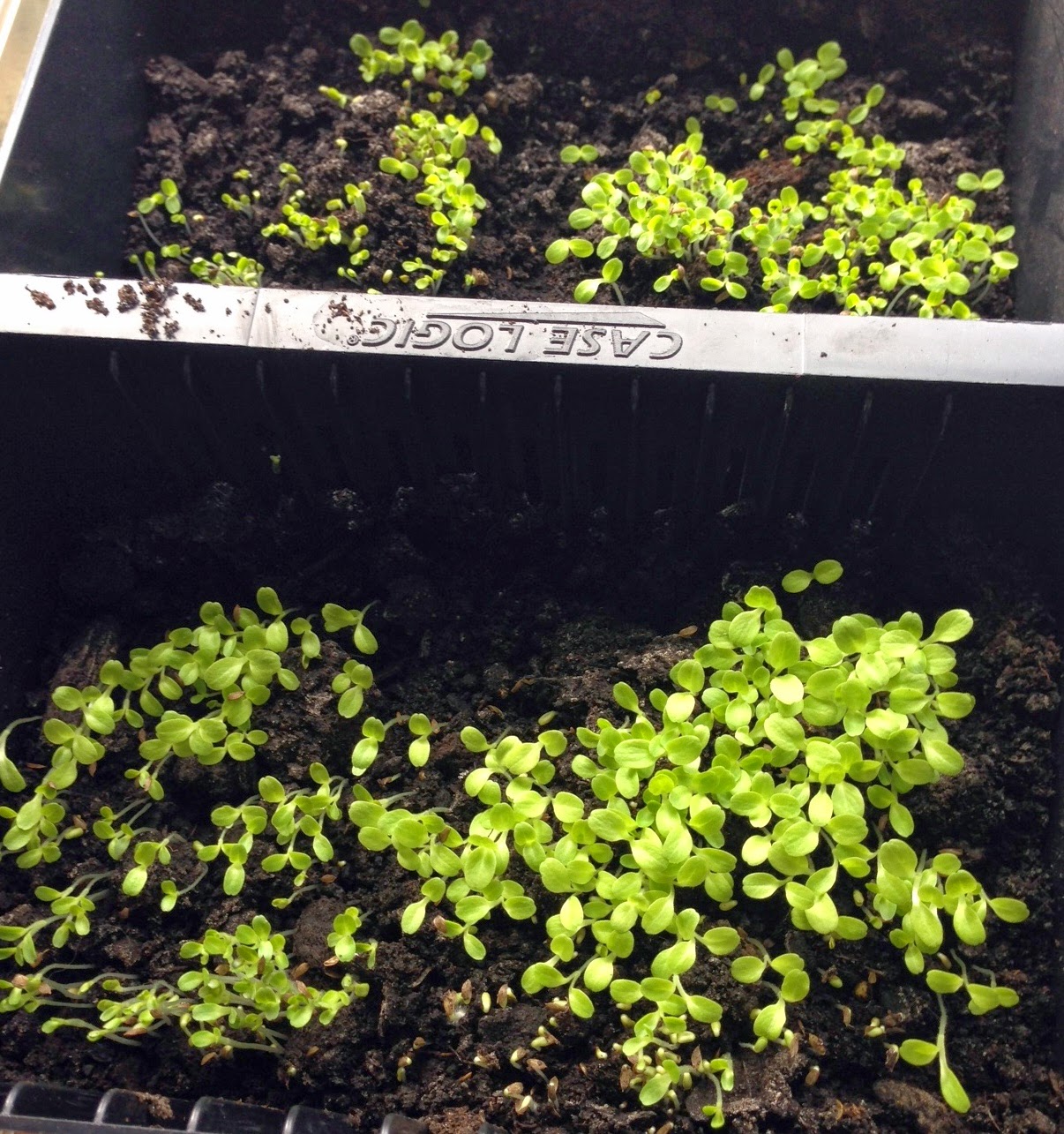 We are still waiting to see 'movement' on our Carrots as well as our 3 onions.

I do realize that onions take longer.  With the 3 that we are trying first...one is about 70 days, another 80 to 110, and the other about 180 days.  Of course the "Ron Burgundy" onions take the longest LOL...inside joke...see previous gardening posts for more on that!