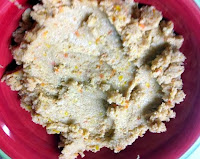 Last night I spent some time in the kitchen with some produce I needed to use - including some small tomatoes and a sweet yellow bell pepper - and my Ninja!

I wanted to do a dip or spread but I also wanted to try something completely different and wanted to get back to the Veganized World Foods.  I cam across various recipes for Arranque Roteño which is a thick tomato dip from Spain.  It sparked my interest and I decided to move forward with it.
Here's what I used:

The photo above was put thru my Ninja Blender with NO OIL or Water.  It was beyond thick and a bit salty from the bread crumbs.  So I decided to add a splash of Grapeseed Oil and about a half of a cup of water.  Here is what it looked like after doing so... 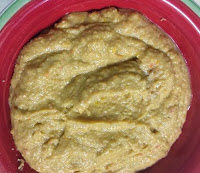 Another thing I did was add about a tablespoon of Garden of Life's Alkalizer & Detoxifier to it.

The main reason I did this was because I have been experimenting with their products and thought that the lemon and parsley flavors might contribute to the overall flavor.

I was right.  It did.  Also by adding the little bit of GoL, GSO, and Water it helped tone down the salt from the breadcrumbs.

Another reason I wanted to try this was because I ordered a pizza from a local place last night and they usually do a good job for me with the dough, sauce, and toppings NOT having dairy in them.  I ask for no cheese and they don't disappoint.  Well, last night...they did a "pizza" with the dough and tomatoes on it...NO sauce, even.  It was rather ODD but I decided to make "lemonade" out of the "lemon" and try this thick Tomato Dip as a Dip for the "pizza" or should I call it dough with tomato?  Regardless - it helped the situation over all and it turned out rather tasty.  In the near future - I hope to do a Pesto using GoL Products.
Posted by Unknown at 8:32 AM