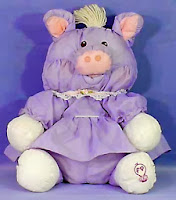 A few weeks ago Opal and I were chatting about Childhood Memories and Toys and keepsakes...things that were sentimental in some way or memorable, even.

Today I thought I would do a quick post about one of the stuff animals I remember growing up!  It was this lil guy!  The Purple Pig Puffalump!  Puffalumps were BIG in the mid 80's.

If you don't recall them...here's a little more more info about them...

They were created by Fisher-Price in 1986.  They were made out of parachute material and 'stuffed' with poly-fill material.  The WikiPedia Page is located HERE but I will tell you I remember MY Puffalump like it was yesterday.   However, I think I treasured it a bit too much - sometimes using it as a pillow - and the Poly-Fill became quite lifeless - but it did last a long time...I remember having it up until about 1997 or 1998 - around the time I was in college.  I wasn't much for "dolls" since I wasn't a "girly-girl" I was more of a "tomboy" but remember my sister collecting piles and piles of Barbies as well as Cabbage Patch Kids.  I would sometimes get My Little Pony's but only the Unicorn ones since I have ALWAYS collected Unicorns.  I think my mom sold them YEARS ago but might have to start looking for them online again.  What were some of your favorites growing up!?
Posted by Unknown at 1:28 PM