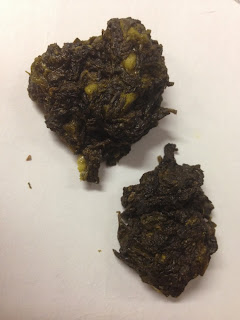 MONTHS ago when I was researching all sort of Kale Chips from different companies and different kind of dehydrated chips and all sorts of different flavors of these said "chips" I came across Seaweed Chips with a Cashew Cheese on top - both dried - both raw.  They were very tasty.  Over the weekend I wanted to come up with some of my own and do them in my new Dehydrator...that is how this idea was born.  Instead of Seaweed or Kale I used Frozen Spinach that I thawed and got as much of the liquid out as possible.  It worked out to be about 2 Cups of Spinach.

I then added a little bit of Wildtree Basil Pesto Grapeseed Oil - only about a teaspoon or so PLUS about the same amount of Apple Cider Vinegar.  I sprinkled in a little bit of Garlic Sea Salt (but a very little bit since I'm not much of a salt person).  I also took a handful of Cashews and Grinded them in my Mini Coffee Grinder I use as a Spice Grinder...made that into a 'near' powder.  I was going for a Parmesan-like texture and taste to it.  I also added 1/2 of a teaspoon of GoL's Wheatgrass Perfect Food.  I mixed everything in to the damp spinach and took pinches of the mixed and put them on my dehydrator trays and dried them for about 12 hours or so.  They sure did have that Basil Pesto Flavor I was looking for!  I ate one of the dried munchies and started craving another shortly after.  I hope to do some more Kale Chip as well as Spinach Chips in the very near future, too!  Stay Tuned.

Participating Post: You're Gonna Love It Tuesdays,
Posted by Unknown at 3:30 AM