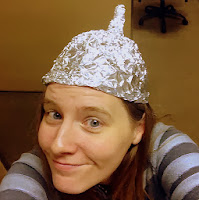 Work has ALMOST been FUN, again!  YAY!  I know this post is VERY late!  This is the FIRST time I have 'dressed up' for Halloween in YEARS!  A few co-workers and I were talking about simple yet funny things to do for Halloween!  I decided to make this tin foil hat and go as a Conspiracy Theorist.  I thought it was pretty original. LOL.

I had some neat feedback on Instagram.  One guy said I should have had all sorts of newspaper clippings in my pockets and stuff to go along with it.  Making this Foil Hat was a bitter harder than it looks.  I did wear it nearly all day, tho!  A fellow Co-Worker went as "Mother Nature" and wore a wine like halo.

It's so nice having a happier work atmosphere around here!  I'm VERY thankful for that!  Another thing I was thankful for recently was my trip to The Labyrinth in Jamestown.  I've posted about this Vegetarian/Vegan Restaurant before but it's been while since I have stopped by.  I pre-ordered 2 Sunday's ago and picked up my order for BOTH Brunch and Dinner.

Yes, you could say I treated myself!  It traveled pretty well considering what I ordered!  For Breakfast/Brunch I had this little gem!  I know, I know...WHAT?  No Pictures!?  So sorry!  I started eating it before I snapped a pic.  It was really wonderful, tho!  The Lemon wasn't over the top tarty or puckery and the Raspberry was AWESOME!  The Vegan Butter was on the side and I dipped my finger in it but didn't feel it 'needed it' so I didn't add it to the Waffle.  Same with the Vegan Creamed Cheese.  The Maple Syrup was local and super sweet.  I usually don't care for Maple Syrup on my Waffles but it was tasty.  Next time I might ask for it on the side so I exclusively taste the Lemon and Raspberry on top of it! 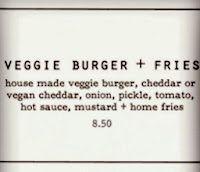 Later than Night I grabbed the 2nd course...Veggie Burger!  This place has some great 'burgers'.  This one was a goodie but there are some others I enjoy a bit better like their Tofu Rodeo Burger, for example.

BUT...this was pretty good, regardless!  I opted for the Vegan Cheddar.  The Pickle was puckery but in a good way!  The Hot Sauce was a nice touch, too!  Their Home Fries are similar to Breakfast Potatoes.  I really wish we had more veggie places in my region but I sure am thankful for this one!