It's Been a HARD Hockey Season... 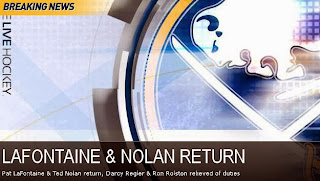 It's been a HARD Hockey Season for me...being a life long Buffalo Sabres Fan.  Yes - I LOVE them thru thick and thin but I've been a bit quiet so far this year.  And for good reason...we are the WORST team in the NHL.  BUT...as of 10:30am today there maybe a light at the end of the tunnel.  I just have to remain calm and patient.  I DO know that things won't change over night but this is certainly a step in the right direction, I think.  I'm excited about it!  WHAT am I excited about, you ask?  The firing of Darcy Regier - the GM - and Ron Rolston - the Coach.  I've been rooting for them letting go of Darcy for over 10 years, actually!  But...that's beside the point...it's done!  The even better news?  The HIRING of Pat Lafontaine to take Darcy's spot (actually he's the President of Hockey Operations NOT the GM) AND the hiring of Ted Nolan to be the new coach!  Fond memories of my childhood...Pat Lafontaine!  He was my favorite player!  Ted Nolan was the coach prior to Lindy Ruff (Lindy was let go last season but was with team for a LONG time as a coach AND prior to that he played for the Sabres, as well!  Lindy was the NHL's longest active-serving coach with one team and second only to Gregg Popovich in the four major sports in North America.)  I won't get too involved with the specifics, tho, if you are interested in those check out these websites: Buffalo Sabres & Official Article from the NHL.  Just had to blab a bit about my favorite sport and FINALLY some GOOD NEWS about my favorite team!  I wish them luck!