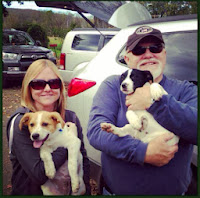 Yesterday I posted a bit about my Sister and her Husband and My Mom and Dad BOTH adopting rescue dogs!  Well, since there has been so much Puppy Activity in our families lately I decided to dedicate an entire post to them. 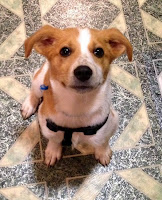 This first photo is from the Rescue's Facebook Page.  My sister Megan with Atlas and My Dad with Lexi.  Atlas is a Beagle/Pointer Mix and Lexi is a Retriever/Collie Mix.  I think Lexi - if not both dogs - might have a bit of Jack Russell as well.  They are both adorable.  They were in the same foster home so they are buddies!  I'm so happy they were able to go to my parents and my sister so they can still see each other every once and a while.  We think Atlas is a few weeks older than Lexi.  So far...Atlas weighs 15 pounds and Lexi weighs 7 pounds. 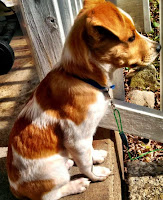 Sunday night I was able to spend a little time with them.  My sister said they had been taking Atlas all over the place with them in the car over the weekend.  I guess he LOVES car rides!  He also gets along with other dogs - not just Lexi - which is good!

My mom told me that Lexi is a good walker...which is great because my dad has been wanting a 'walking buddy'. 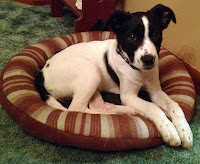 I also found out that Atlas has an extra 'thumb' or a 'dewclaw' on each back foot.  The one is completely detached and the other does have partial bone.  They are going to remove them when they get him fixed because they will cause problems down the road, I guess.  My sister didn't want to do it but both the shelter and 2 vets told her to.

Lexi LOVES Bernie's Cat Bed.  So far...Bernie is tolerant.  Of course, Lexi has her own pillow bed and crate area which she enjoys, as well. 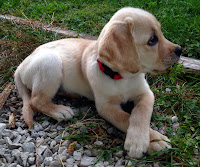 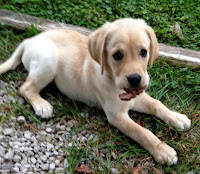 In other Doggy News...my Brother-In-Law is still doing good with his puppy Blue.  He's getting pretty big!  His coloring is amazing, too!  It's getting pretty defined.  I'm told he LOVES to be in the enclosed backyard and likes to run around.  He also likes being inside, tho, too!

His eyes look so sad in the photos but Mike says he's a VERY happy dog!  He says he loves to hold things in his mouth, tho.  He doesn't really eat them just likes to have them hang out of his mouth...as you can see in this one photo.  It's a Bark Chip.

As far as our Dogs go - things have been going pretty good, I guess!  Paco has calmed down a little bit in the evenings which is nice...he was a little nuts for a while and sometimes I would have to play ball with him for HOURS which I enjoy but I also have things I have to get done around the house, too, so I'm glad he's been a bit lazier or at least had his 'fill' of playtime within an hour instead of HOURS lately.  I had to laugh over the weekend, I bought a new shirt and my husband said I looked like a 'prisoner'...it having stripes and all.  Then I put Paco's shirt on without noticing that it was much like mine.  My husband told us to pose for a pic and here you have it!  Apparently we are bop-see-twins!
Posted by Unknown at 8:32 AM