Catching Up For REAL This Time! 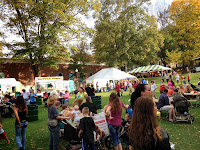 Ummm, yeah...so...I mentioned last week that I was going to do multiple posts most days last week to CATCH UP and that sooooo didn't happen.  So...now I have twice as much to talk about, I suppose!  Oops, sorry, my bad!  Another LONG POST AHEAD!

I'll start back to the weekend before last, I guess.  We spent the weekend in Salamanca, NY, at their Falling Leaves Festival.  The weather was rainy towards the end of the day on Saturday and it was kind of nice on Sunday.  There IS a reason they call it Falling Leaves.  The leaves were CERTAINLY falling EVERY WHERE!  It was neat, tho!  Sales could have been better but overall it was an 'ok' event. 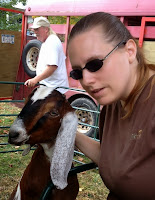 There was a Bird Rehab Center there as well as a Petting "zoo" with rehabbed animals.  One of the animals was this large rabbit that was so cute and soft!  Then I was able to spend time with some of the goats that I met last month at another event.  This one came up and gave me 'kisses' and nudges, even!  LOVE them! 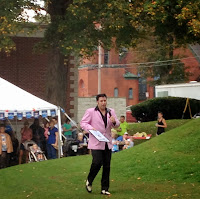 Elvis was there!  Well...it was an Elvis Impersonator, actually, but he was pretty good!  He drove in on a Motorcycle!  He seemed like QUITE the crowd pleaser, too! 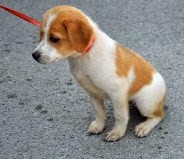 On Sunday there were Puppies/Dogs/Kittens from a local no-kill animal shelter.  They were adorable!  I swiped these photos off the website, actually!  The Reddish/Brown and White one is Atlas and the Black and White one is Lexi.  Atlas came to them from a Kentucky "kill" farm of sorts.  Apparently they arrived at the facility and they had to 'sell' them and if they weren't 'sold' in 5 days or less they were destroyed.  How awful!

My father fell in LOVE with Lexi right away!  He said she reminded him of his dog when he was 9.  A few days later he woke up and told my mom that he had a dream about Lexi the night before.  Last Friday My Mom & Dad officially adopted Lexi and my sister and her husband officially adopted Atlas!   I will have more current photos this week or maybe even later today!  They are amazing dogs!  Atlas is a Beagle/Pointer Mix and Lexi is a Retriever/Collie Mix. 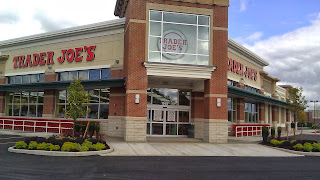 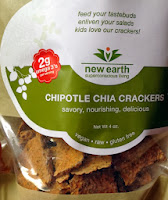 In other news...Amherst, NY, my old stompin'-grounds finally has a Trader Joe's!  It opened this past weekend and I wasn't able to go YET but I will soon...FOR SURE!  Here's a photo I found on Facebook of the store!  It looks awesome, doesn't it!?

I've been snacking on Flax and Chia Crackers a lot lately!  I think this latest spur of interest is because of some of the dips and spreads I have been creating!  I have so many products I need to review - it's CRAZY!  Here's one of them!  Chipotle Chia Crackers from New Earth!  These are VERY VERY crunchy.  Crunch with Caution, I like to say!  These are powerful RAW treats!  Check out the ingredients:

At first bite I was not a huge fan of the texture but after gnawing on them I quickly changed my mind because they were tasty and somewhat addicting!  They are VERY power-packed with 22 grams of protein per bag!  YAY!

Another thing I wanted to share with you was my new favorite food attempt!  Almond Cheese!!!!  I have been LOVING the Whole Foods Co-Op in Erie's Cashew Cheese and this is darned close!  I will certainly be making this A LOT it's so good! 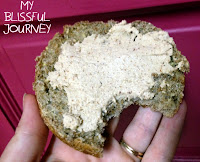 As you can see it's awesome for dipping!  And spreading on things!  It thickens in the refrigerator over night.  YUMMO!

The English Muffins are Sprouted from Ezekiel Bread.  The Flax Crackers are from Foods Alive.
Posted by Unknown at 1:35 PM