Yes, it's true!  I'm going to be a posting FOOL this week!  I'll probably average at least 2 posts per day!  I'm trying to catch up on a bunch of stuff from the last week or so PLUS have brand new stuff to share with you...including the post before this one - food from last night!  BUT...this post that you are reading now is of the 2nd concert I attended last week at our County Fair!  On Wednesday Night we had the Legendary Marty Stuart on our stage!  I'm still waiting for the Meet & Greet Photos.  I didn't take them but I should get them soon!  In the meantime, here are a few from that night!  This first one I did take while standing next to our security guards from in between back stage and the side of the stage.  As you can see we were able to use those "Big Screens" again on each side from the night before.  They came in very handy and many people commented on them!

Marty Stuart's Crew Manager and Crew were great!  He was very calm, cool, and nice!  We did a Meet & Greet outside of the Backstage Area by his Tour Bus prior to the show and then he come out to sign autographs after the show and stayed until the last person was able to meet him and his band!  How cool is that!?  I LOVE it when the entertainers stay to meet the concert goers and fans! 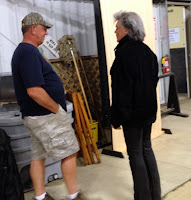 In addition to my husband taking care of the entertainment as a part of his duties being on the fair board - his uncle (and cousin) have both been helping the last couple of years in the building as well!  Here you can see a pic of DH's uncle talking to Marty Stuart backstage after the signings!

I have to say I enjoyed getting my picture taken with Marty because he isn't very tall!  It made me feel "normal height" LOL.  He was just a few inches taller than me but then his hair was teased up a few inches too and I am pretty sure he had a few inches in the boot area as well!
Posted by Unknown at 12:42 PM