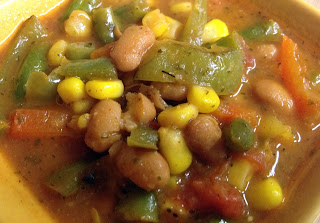 I've been wanting to try and do something with one of our newest products called Spicy Chipotle Ranch.

Last night with what little I had in the house before shopping this weekend I made a darn tasty Vegan Stew with it!  I used Pinto Beans, Corn, Green Beans, Diced Tomatoes, Green & Red Peppers, Onions, Water, and Spicy Chipotle Ranch from Wildtree.  It was VERY GOOD!

I would also like to try this with Vegan Sour Cream for a dip in the near future!A few other suggestions that were vegan or easily veganized were: Taco Salad, Chipotle Black Bean Burgers, Stuffed Avocado, and Fried Zucchini. 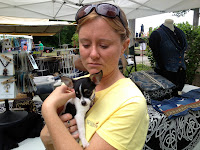 I told you earlier this week about this past weekend and the Strawberry Festival.  Well, while we were there - towards the end - and a girl brought her 4 week old Chihuahua with her.  He was so cute!  This is a pic of my sister with him.  He only weighed 1.8 pounds.  My sister LOVED him!  There was another Chi, there, as well, but didn't really want to be social with us. 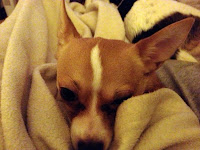 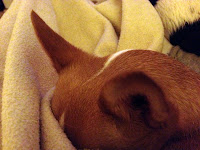 Last night Paco was snuggle-E after a while, again.  Of course, I wasn't going to complain about that.  In this photo you can see Suzie's back side as well.  I'm so happy they are all 'used to' each other now.  Sometimes Riley 'grumps' when Paco gets too close when HE is the one who wants to be closer to me - but - for the most part - every one is ok with the daily in's and out's of the 'Bliss House Hold".  Paco really likes to 'burrow' in blankets and be covered and that is common for Chihuahua's.  He's been hiding his eyes under blankets lately when he gets tired but tries to fight it.

And other times he uses the 'sleeping bag' method.  He's so funny!

In other news - I still don't feel quite right since I have been to the dentist.  I have to say my front teeth where all the intense cleaning took place is getting a LITTLE better BUT my upper left hand side wisdom tooth is causing some 'ruckus'.  I think it's moving around again and it's sensitive but in a different way than the front teeth were sensitive if that makes sense.

I have been 'upping' my intake of CLOVE to try and help things along.  How does CLOVE, help?  Well, they are known to have antioxidant, anti-septic, local anesthetic, anti-inflammatory, warming and soothing properties.  The spice contains health benefiting essential oils such as eugenol. It is a phenyl-propanoids class of chemical compound, which gives pleasant, sweet aromatic fragrances to the clove-bud. Eugenol has local anesthetic and antiseptic properties...useful in dental care essentials as well as in treatment procedures. 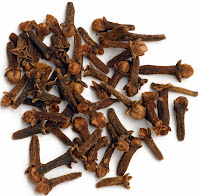 It's also great for digestion!  And...contains a good amount of minerals like potassium, manganese, iron, selenium and magnesium. Potassium is an important electrolyte of cell and body fluids that helps control heart rate and blood pressure. Manganese is used by the body as a co-factor for the antioxidant enzyme, superoxide dismutase.

But the benefits of clove don't stop there!  Clove contains very good amounts of vitamin A and beta-carotene levels. These compounds are known to have antioxidant properties. Vitamin A is also required by the body for maintaining healthy mucus membranes and skin in addition to essential for vision. Consumption of natural foods rich in flavonoids helps to protect the body from lung and oral cavity cancers.  Additionally, this spice is a good source of vitamin-K, vitamin-B6 (pyridoxine), thiamin (vitamin B-1), vitamin-C and riboflavin. Consumption of foods rich in vitamin C helps the body develop resistance against infectious agents and scavenge harmful oxygen-free radicals.


One of the things I have been sipping on a lot more than usual lately is Blue Lotus Chai's Rooibos Masala Chai which is heavy on the Clove as well as other beneficial spices.

So...there is your clove lesson for the day! teehee.  Hope you found something useful!