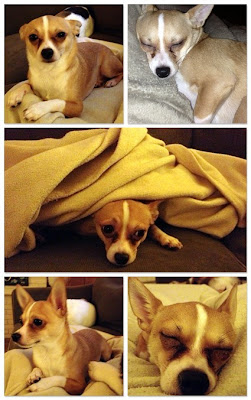 I took so many pictures this weekend that I had to consolidate them so my blog posts weren't too long.  I will have at least 2 entries today - this being the first.  I used a few free photo collage makers online and I will continue to tinker with them.

Here are some photos of Paco!  The top left one and the bottom left pic where of him while Dale was playing his new guitar!  He got quiet the deal on a Martin D41 - He's been a Martin Guitar Enthusiast for a long time and he's owned several since we've been together.  He traded in two valuable ones for this guitar.  NO...he didn't pay ticket price on that!  But he couldn't pass up the deal he got either!  It was UNheared of!  So, he's a VERY happy camper today!  We've noticed that Paco LOVES it when we play our String Instruments.  I loves being serenaded and he loves the 'concert'.  He calms right down and sits there and watches who ever is playing.

The other pictures of him are sleeping or almost sacked-out.  He was pretty emotional this weekend like that.  It was nice!  Dale took the photo of him sleeping on the upper right last night.  I am usually the one snapping the photos but he couldn't resist with Paco being SO sound asleep on his lap!  The cat remained pretty low key all weekend as did Suzie other than her barking at the neighbors during their yard work and the other noisy neighbors getting home VERY late at night. 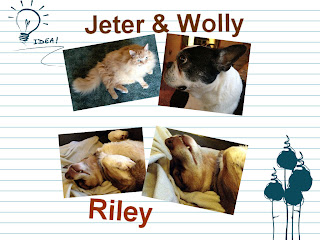 Here's another collage of furry friends I took over the weekend.  Of course you can see Riley here on the bottom - he was pretty much a slug all weekend, too!  He decided to fall asleep that way - silly boy!  The top to furkids are my parents!  The orange cat is Jeter which is my Mom and Dad's beautiful boy and Wolly is my Mother-In-Law's kiddo!  You might be wondering why we/I spell WOLLY that way...well, YEARS ago my MIL had another Boston who's name was MOLLY and when they came across this one - a rescue - she wanted to pay tribute and turned the M into a W and that is how WOLLY came about.  This passed year she had two other dogs pass-on which was really hard.  This is the only dog they have now.  I'm tempted to bring Paco over for a visit soon, tho. 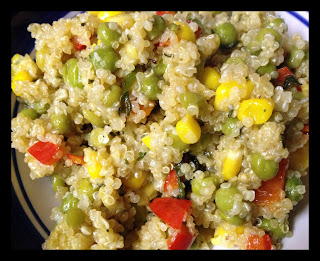 We FINALLY got to get groceries over the weekend, but I think I will go thru my whole weekend ins and outs in my next post.  I will stick with the Furkids and the Food Attempts in this one.

Here is dish that turned out REALLY well - that I am quite proud of, actually!  I think I will call it Dijon Quinoa & Veggies.

I ended up mixing a few flavors together that were sort of a ying and a yang but it turned out really tasty and very flavorful!  Here is what this dish has in it: 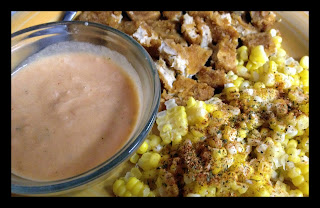 Last night I threw this together - just because.  It ended up being my dinner and it was better than I thought it would be.  I know it's missing some green but I did eat another meal earlier in the day that filled some nutritional holes, here. Corn off the Cob with Wildtree's Spicy Chipotle Ranch Sprinkled on top and I cut up a spicy vegan "chick'n patty".  I thought it needed a dipping sauce so I tried to throw together a Buffalo Sauce of sorts.  I didn't write down the measurements but this is what I put in the sauce:

What did you do this weekend for food?  Did you take any photos for your animal friends?  Stop back later today for another post!
Posted by Unknown at 9:18 AM