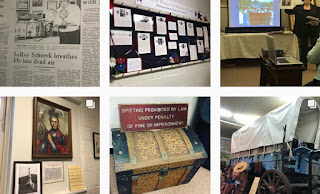 Guess What?  I'm STILL trying to catch up!  LOTS of photos and blabbering ahead!

Just like with the last couple of posts I will be posting photos in 6's.  This first set of 6 photos show some of the snapshots from the local history museum I briefly blogged about yesterday.  This tour of the museum was part of our local League of Women Voters Annual Membership Meeting in the fall.  Up top you can see a laminated Lithograph of a newspaper article mentioning our the radio stations I work for and the previous owner.  To the right of that (top/middle) it shows many historical WOMEN from our area!  Then you can see one of our long-time members presenting a 'League 101'.  On the bottom/left it tells about Chief Cornplanter who is/was a HUGE local historical figure here where I live.  Next...you will see an antique chest and sign...the sign made me chuckle so I took a pic of it.  Then you will see an old, restored wagon! 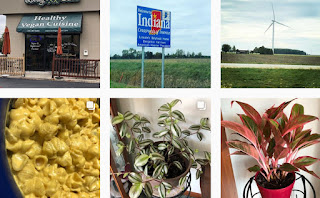 With this next set of 6 photos - I will start on the bottom first...you can see one of my many vegan mac and cheeses and then two plants.  The two plants are progress photos of the ones over at my parents house that you saw in yesterdays post, too!

Then on top, you will see a restaurant called LOVING CAFE and that was the first full day in Fort Wayne, IN, during our road trip!  You can see the state sign and a turbine windmill, too!

We took my new Fiat on the trip and it did great! 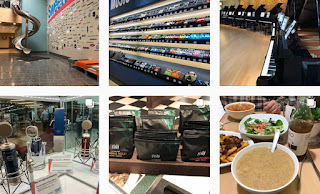 The first 4 photos in this set of 6 are from Stillwater which is a HUGE Music and Sound store in Indiana.  My husband is really into that stuff so we stopped by and saw their shops and facility and it was pretty amazing!  In the first photo you can see a SLIDE from the 2nd down to the 1st floor.  Next you can see a bunch of the pedals on display.  Then some pianos.  And on the next row a slew of mics.

The other two photos are some of the 'eats' that we found.  The one in the center is the choice of teas I had over at Metro Diner.  While we were there I had some of the best Avocado Toast I have ever had and it was HUGE!

The soup on the end was part of our meal from Loving Cafe.  I had Mushroom Pistachio Soup - it was terrific and RICH!  Hubby had a vegan cabbage soup!  He LOVED it!  We splurged and shared and had vegan chili cheese fries.  Hubby also had a salad!  Everything was AMAZING! 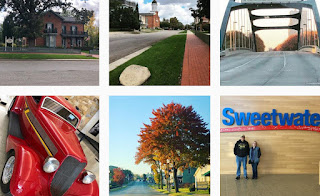 The first two photos in this set of 6 were taken in Wasbash.  Neat little town.  In the first photo you will see the outside of a home that was owned by Dr. James Ford...it's now a historical landmark for their community.  We learned all about the family and the Doctor who was also an inventor, philanthropist, among other things!

Back in Fort Wayne...I was able to take a quick photo of Martin Luther King Jr Memorial Bridge.  I wished we could spend more time at the bridge but we didn't.

I was able to take some nice fall foliage photos while we were there.  And the other two photos were from the Stillwater Building.  The car was once owned by ZZ Top. 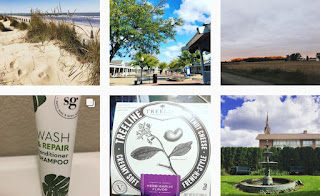 While we were on this road trip we visited Lake Huron in Michigan City, IN.  It was chilly but neat to spend time there. The photo next to the shore is when we stopped at The Michigan City Outlets...we were among the first ones there that day.

I was able to spot some vegan finds while on this trip!  The Shampoo and Conditioner was our complimentary travel size ones at the hotel!  We stayed at Fairbridge Inn in Fort Wayne and it was clearly marked VEGAN on the outside.

I officially visited my first Kroger while in Fort Wayne, too!  I picked up a few items including the Treeline Vegan Cheese you see above. 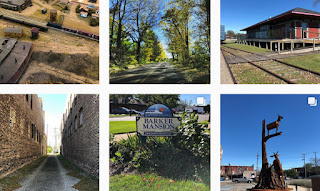 We attempted to visit Barket Mansion in Michigan City but no one answered the door.  They were listed as OPEN on their door, website, Google, Facebook, and Telephone.  After the two of us and about 6 other people gave up knocking we all left.  Too bad.

I did enjoy walking around many of the towns/cities we visited and took several photos of local art and buildings.  I'm thinking about entering a few photos in our fair this year.  Let me know which ones you think I should enter. 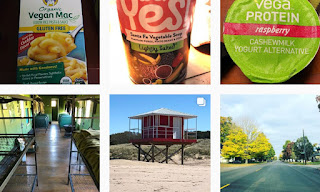 I also stopped at my very first Meijer Store, too, and LOVED it!  I found a LOT of items there including the 3 items you see here!

Below those, you will see a railroad/train car.  That was from our roadside stop in New Buffalo, MI.  They had a Railroad Museum there that was pretty neat. 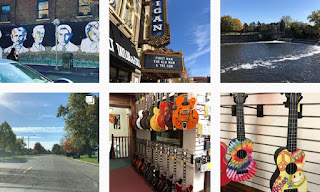 We then drove up to Ann Arbor, MI.  I wish we could have spent more time there, too!  I enjoyed trying to spot the local building art and murals.  You can see one of them above and a few below, too!  We also stopped at the Michigan Theatre but only for a quick photo.

In Lansing, MI, we stopped at Elderly Music.  Hubby thought that was pretty cool.  I found 2 cheap ukelele's and I was tempted to buy one but couldn't make up my mind which one to buy so I didn't buy either and totally regret it!

Behind Elderly Music was Burchard Park and North Lansing Dam.  I thought they made for some pretty neat photos, too! 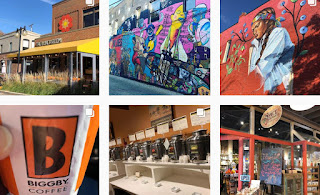 I know I am jumping all around here but it's fun!  While we were in Ann Arbor we did travel over to the Kerrytown Shopping District.  Inside the main building, we stopped at The Lunch Room which was completely VEGAN!  I think at some point I will be blogging more indepth about this place but just a sneak peak today!

Nearby was more murals and art!  And two of the other shops I stopped at was a place that sold a variety of oils and vinegars!  I ended up going back and buying a Meyer Lemon Balsamic!  YUM!  The other shop was Spice and Tea Merchants and with all the tea I drink I had to stop!  I've actually had and reviewed some of their tea over at Sororitea Sisters before but just HAD to buy a few new-to-me-teas while there!

And speaking of tea...many of you may know that I NEVER add anything to my tea...no milk...no sugar.  Well, we stopped at a Biggby Coffee while in town and I noticed they had VEGAN options so I knew I had to at least TRY one of their Tea Lattes made with Coconut Milk...and I have to say it was pretty tasty!  They used Harney & Sons Earl Grey and Coconut Milk! 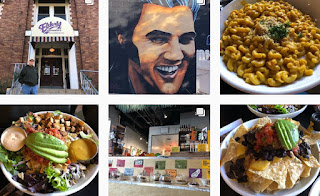 Here is another photo from Elderly.  Then more wall art murals...ELVIS...he was tucked behind buildings in an alley.

Then...FINALLY...Vegan Food...from The Lunch Room (Detroit Street Filling Station)!  Up top is their HUGE bowl of Vegan Mac and Cheese.  I believe it was Butternut or Squash Based!  I had that and took a bunch of leftovers back to the hotel!  On the bottom row, you will see more food!  Hubby got a salad...but at The Lunch Room...you don't JUST get a salad...you get a MASSIVE Salad!  It had peppered tofu, avocado, LOTS of different kinds of leafy greens, Salsa, Cabbage, Tortilla Strips, a chipotle ranch and cheese sauce - everything VEGAN!  We couldn't help it!  We had to get nachos, too!  It really WAS...way-too-much-food...but...it was SO GOOD!  On the nachos, they put their signature vegan cheese sauce, black beans, salsa, avocado...and it was AWESOME!