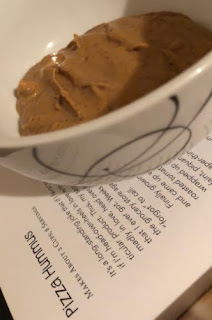 I made some Pizza Hummus last night from one of the new Vegan Cookbooks I bought...can you guess which book this recipe is from?

The outcome of this attempt?  I have a NEW LOVE!  Pizza Hummus is the BOMBDIGGITY! 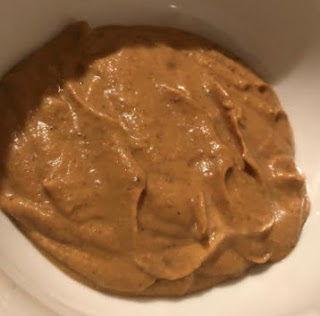 If you haven't tried Pizza Hummus yet do yourself a favor and make some FAST!  It will change your life!

These might not be the most flattering photos of the finished product but I couldn't wait to dive in!

It does have a good amount of Nutritional Yeast in this recipe.  I wouldn't change the amount.  It's RIGHT ON.  In return - you have plenty of B Vitamins in this recipe!

This is a recipe I am sure to make often! 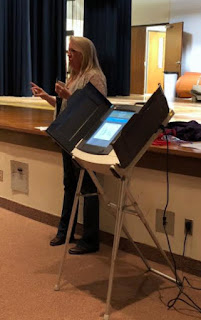 Here's a photo of something I helped with last week at one of our local high schools...Voter Registration!  Pictured here is our county's Voter Registrar.  The League of Women Voters Chapter I belong to helps with this each year.  She brought one of the voting systems to show the kids and they could try it out.

A friend and fellow league member of mine was in a different school the day we held the Refugees chat later that day.  She told me that they had about 20 kids register during her session.  The group I helped with was a smaller group and we still had 5 that filled them out and submitted during the session and 4 more said they would fill it out and submit it later.

One thing I forgot to mention from last weekends road trip was that we stopped at Bahama Breeze for lunch.  On the menu was a vegetarian option of Jackfruit Tacos.  They made a vegan version for me and it was FAB!
Posted by Jennifer at 7:27 AM