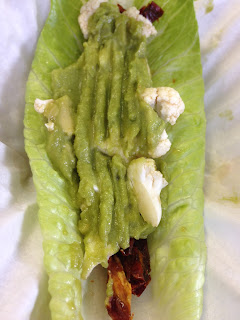 Yesterday I hinted at something that I have tried lately and LOVED and will be eating a lot of until I run out of the ingredients.  That is Raw Vegan Tacos.  I grabbed Romaine Hearts, Sun Dried Tomatoes, Guacamole (because it was cheaper than Avocados), and Cauliflower at a little mom and pop shop and I already had some Coconut Aminos at the office.

I marinated the Cauliflower in the Coconut Aminos and used it as the bottom layer along with the Sun Dried Tomatoes and topped it with Guac!  I have to say it was pretty awesome!

They are messy but I don't care.  The Guac sort of helps with the mess tho.

I will be doing variations of these in the near future - for sure! 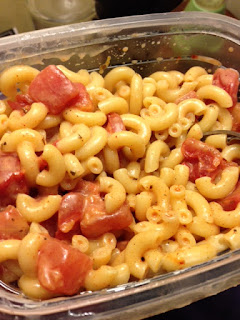 I have been saying that my food efforts have been pretty weird as of late.  I either throw something together at the office, on the road, or in the camper.

We are having some issues with our house and I haven't been able to cook there.

This 2nd photo is something I threw together at my parents house.  They didn't have much that was vegan in their house and I didn't know prior to stopping by that I would be eating there.  I made up some Mac and added stewed tomatoes!  I threw some Earth Balance on there, too!  It wasn't too shabby!

There has been a LOT going on the last several months and I wasn't going to mention it on the blog but I feel like I should. 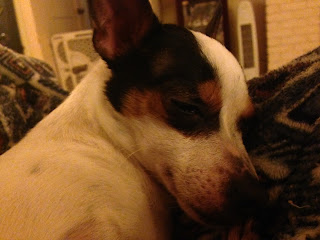 On of the MANY things we have been stressing about is the furkid situation.

In the past month ALL of our furkids have been at the vet as least once.  Charlie - our 17 year old feral cat - was acting weird and I thought he had a stroke but it was a really wicked double ear infection.  We also found out he has kidney failure.

After treating the ear infections we decided to switch his food to a Kidney Diet to help him with that as long as we can.  Since he's a really wild (feral-like) cat and always has been we don't want to stress him more than we have to by taking him to the vet PLUS there has to be 2 vets there to deal with him.

Moving on to the dogs - Cricket (pictured above) had to go in for a check-up and shots.  Riley had to go in for the same - and he had a double ear infection, too.  He has always had Chronic Ear Infections so we are used to it.  However, this time around they tried a new med on him and it seemed to work well.  He had to go in 3 times.  Then there is sweet Paco.  Oh...sweet Paco!  That poor guy!  He's had such a hard time with everything but he's a fighter!

I had to take Paco in for Kennel Cough - it's the only thing we give him - up the nose - we don't vaccinate him otherwise because of his immune issues.  Then a few weeks later we found out he caught something from the kennel so we treated that.  Then his nose started bleeding a little bit and we had him in twice for that.  After finding something on X-Rays we had to decide what to do moving forward.  We are still trying to decide.  He's be in about 4 times already.  They found something in his nasal passage.  It's either something that he sniffed up and got stuck or it's cancer.  Knowing how hard he has has it with other issues his whole life all I can think of is that it's cancer.  GOD!  I hope it isn't.  I think we have the choice made - and that is to have our vet go in and do exploratory surgery and see if she can remove the thing that showed up on the X-Rays.  But I;m afraid because of his immune issues.  Because he has ITP/IMHA that means he might not clot or might clot weird and it could kill him.  Also - if the vet can't remove it - we can't really do cancer treatments because of his immune issues.  From what I have seen about Nose Cancer in Dogs it will grow and morph his face and/or cause seizures.  It seems like a lose-lose situation.  Our vet was on vacation so I need to call her back to see how we are going to go about this.  In the meantime every couple of days he has a slight bloody nose.  We have been treating it with Epinephrine.   These vet bills have been a lot to handle all at once in addition to all of the other stuff we have been facing the last several months.  But those stories I will save for another day.