Frankie, Trinity, and The Monarch Butterfly 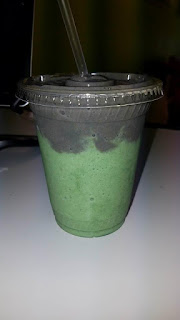 I was intrigued by a recent FB Post from Total Evolution...
Is it #Halloween yet? Close enough for us!  A new favorite on the menu, meet The #Frankie!

#TheFrankie is a combination of two of our favorites, the #Turmeric and the #PineappleParadise, each kicked up a notch by some of the most #nutrient dense, #detoxifying, #antioxidant full, super powders! I cannot say enough about the benefits of these ingredients! #Anti-inflammatory. #Antioxidant. #Plant #protein #GLAs and #Omega3s #Energy boosting. #Digestion supporting. Highly absorbable #iron that is gentle on the stomach. So much more. Plus, omg it tastes amazing! Pineapple upside down cake, anyone?

When I found out it was vegan I knew I had to try it!  It was pretty amazing!  It did have banana in it but there was enough other stuff in there to take my mind off of it.  And YES on top that is a bit of Activated Charcoal. 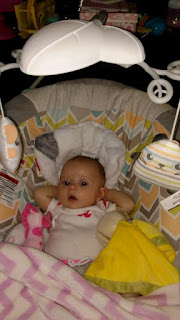 It's been a couple of weeks since I have seen my sweet niece Trinity but I have been getting text messaged photos!  This is one of my favorites as of late.  She was sitting there watching the Yankees game with my parents!

I just can't get over her pose!  Arms behind her head!

I'm hoping to see her this week.  I might actually have the opportunity to see her a bit more over the next couple of weeks!  YAY!

As many of you know I'm not a fan of winter for just about ANY and EVERY reason but this year I have the added dread of not being able to see Trinity as much due to wintery weather conditions.  Boo Hiss!

She's about 4 months old already and still only about 10 pounds!  She's such a peanut! 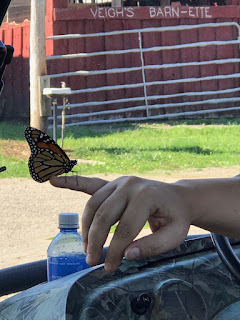 This past weekend a few of us were prepping buildings for camper storage at the fairgrounds and cleaning up some of the buildings.

We were taking a break while a couple people were putting away some equipment in one of the barns.

I noticed more Monarchs this year after not seeing them the last couple of years.  This made me VERY happy.  As many of you may know about the decline in Monarch Butterflies.

I extended my arm and finger in hopes it would land on me and it did - not once - but 4 times.  A friend of ours took this pic the last time it was on me.  It stayed like this for like 5 minutes!  It really was a magical moment!