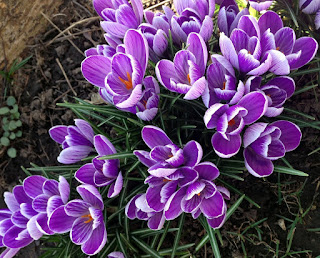 I'm going to start a little backwards here.  When I got home from work yesterday I noticed something colorful in the backyard.  I HAD to investigate!  This is what greeted me!  How lovely!  I moved into the house I am living in prior to DH and I getting married so I think I've lived there about 16 years since our 15th Anniversary is coming up soon.  I don't remember these flowers back then BUT the last 3 or so years they have been popping up!  Nature is mysterious and gorgeous...isn't it?  I can't wait for more signs of spring!  I will be sure to report! 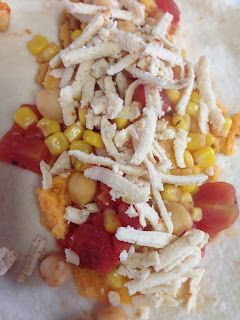 For some reason I could edit all my photos except for this 2nd one and I don't know why but it wouldn't let me flip it.  This was my dinner (times 3) last night!  I worked off of leftovers once again!  Sweet Potato Chickpea Wraps.    In addition to mashed Sweet Potato and Chickpeas I added Corn, Diced Tomato, and Jack Daiya Cheese.  It was way better than I expected it to be!

After I used some of the Diced Tomato, Corn, and Chickpeas I then had more leftovers to use.  I ended up making that happen in the next few photos.  I have to warn you - this will be a LONG post today with MANY photos!  I almost forgot to show you the meal I had at the Co-Op with my parents and sister last weekend so that is below, too! 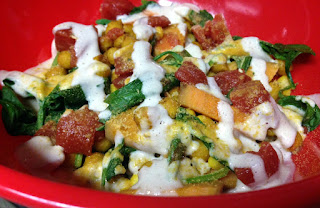 But before I get to those photos I have these next few pics to share.  It's a progressive dish using leftovers!

It all started as a Bowl.  I used Spinach, Corn, Sweet Potato, Chickpeas, and Diced Tomatoes.  I topped with a Tahini Sauce and sprinkled Nutritional Yeast.  I will have the recipe for the Tahini Sauce in a little bit but first I wanted to show you how the leftovers transformed into additional meals. 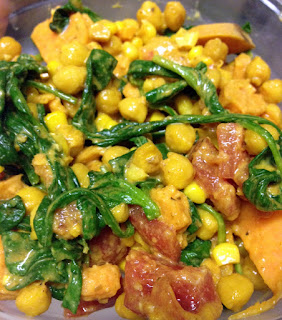 I sampled the bowl and it was ok.  It kind of felt like it was missing something.  Before moving on and tinkering with the dish I mixed up what I had and took a pic.

The only other thing I added to this was Turmeric.

I also forgot to mention I seasoned the Chickpeas wish Cumin and Garlic. 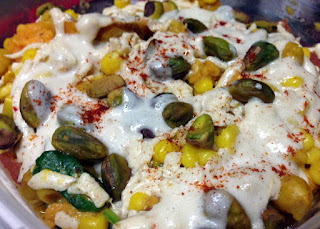 Now...THIS is the TICKET, folks!  This is the 3rd and final attempt and the real winner of the bunch!

Now the only thing I have left is 1 Sweet Potato, a little Cauliflower, and Spinach.  I'll have to see what I can come up with using those items! 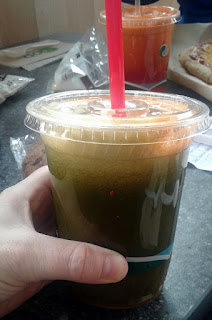 This past Saturday my parents, sister, and I went to Erie to check out Baby's R US and Target for my sister's baby registries.  They had a bunch of questions about car seats and such.

After all of the shopping stuff I suggested we go to the Co-Op Cafe.  The Wholefoods Co-Op Cafe, that is.  We had a nice time!  First up - some snapshots of our drinks!  Mine - the green one - is called Alkaline Heaven.  It had Cucumber, Carrot, Celery, Spinach, and Apple.  My father got the orange one in the back.  It was called Sunrise.  It had Carrot, Apple, Orange, Pear, and Lemon.  He tries to stay away from Cucumbers.  I think it was the only one that didn't have Cucumbers in it.  Both were good.  I sampled everyone's!  My mom and sister got smoothies.  The Triple Berry Smoothies to be exact.  They had Strawberry, Blueberry, Raspberry, Orange Juice, and Almond Milk.  Yes...the BOTH opted for the Almond Milk over the standard. 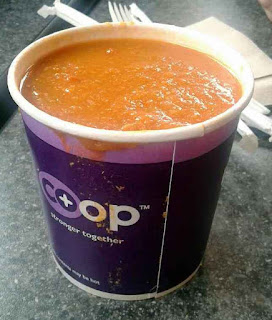 Mom, Megan, and I chose the soups they had that day.  Mom grabbed the Tomato Garlic and it was VERY garlicky.  Megan decided to go with the Chickpea one.  They both ordered smalls.  I went with the LARGE and gobbled up the Apricot Red Lentil Soup which is one of my FAVORITES there!  My other favorite is a Spicy Peanut something or other but I haven't seen it there in YEARS.

There is just something about this Apricot Red Lentil that I cannot get enough of!  I could seriously drink it by the vat!  As you can see I was messy with it while putting it in the container.

My Dad went with the Cheese Pizza on Whole Wheat Dough.  It wasn't vegan because of the dairy cheese but at least it was meat-free! 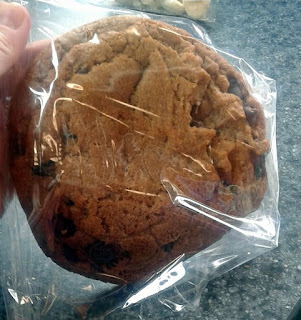 And finally...we scored this VEGAN COOKIE!  It was about as big as my face!  All 4 of us shared it!  Everyone liked EVERYTHING they had!  I have to say this VEGAN COOKIE was probably the BEST I have had to date!  YUMMERS!

It's been another busy week and the next several days are going to follow suit.  I like being busy.  I actually get more accomplish when I am busy than when the days are less filled with various tasks and activity!

But then again...I have always been BACKWARDS.  When I was in school I did better when I had all the extras going on.  Then when I ONLY had studies happening.  The busier I was the better my grades.   Now...the busier I am - all around - the better work is!
Posted by Jennifer at 9:15 AM