Get In My Belly!

Once again I have a lot to share with you but very little time at the moment to write one long and thought out post so I will have to do mini posts I guess.  Better than no posts at all?  I'll let you be the judge.

I'll start off by saying there is more where this comes from.  This first photo is one of the new-to-me Kombuchas I have tried lately.  I picked it up at The Whole Foods Co-Op in Erie.  This past weekend was the first time in a LONG TIME that I was able to make some great grocery hauls and SILLY ME I put everything away before taking photos so I will be sharing those trips with you individually at some point. 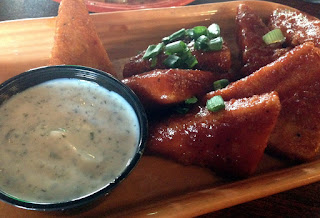 One of the highlights of Sunday was that we were able to travel to Mentor, OH, and visit Melt again!  YAY!  I LOVE Melt because there are MANY Vegan Options!  The first time DH and I went together we both tried the Vegan Tofu Wings!  He LOVED them!  Yes...HE...who is FAR from veg LOVED them!  Come to find out their TOFU WINGS are (one of their) best selling apps!  Even popular among the meat eaters!  This is the photo of the Sweet BBQ ones I tried this time around!  YUM! 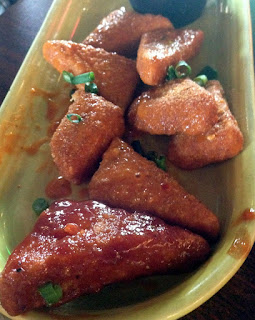 In the photo above I chose the Vegan Ranch!  This next photo is are the Spicy BBQ Tofu Wings.  He got one order and I got another order but we ended up sharing both of them!  He ordered regular Bleu Cheese (not vegan) but I was stoked he LOVES these Tofu Wings so much!

We ended up ordering our dinner to go, too!  We learned a trick from the waiter.  If ordering to go and eating the sandwiches at another time you pop them open face in the oven or toaster oven at 350 degrees for 5 to 10 minutes and BAM!  Just like you ordered them at the restaurant!  Of course the sandwich he got - to go - wasn't veg - but mine was!  I went with the Mushroom Melt.  I will have to share that at another time! 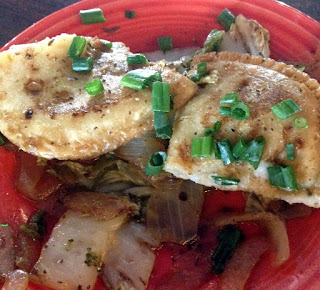 At Melt they also have vegan Perogies!  They make their own from what I understand!  They are tasty!  I think they were supposed to be with vegan cheese and vegan sour cream.  I think they may have forgotten those items but they were still YUMMERS!  DH also liked these, too!  They have their own "kraut" which is different from what I think Sauerkraut would be but it's their own so I'm game!  It was cabbage and onions, I believe and they put it on just about anything!  I'm been a while since I have had perogies because most of them have dairy in them - at least the ones I see at the stores!  If I had more time and patience I would try making them myself...but I don't!
Posted by Jennifer at 6:22 AM