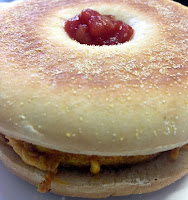 Yesterday I was able to take a little time in the kitchen with food prep and such.  I've done Strong Hearts Cafe & The Vegan Zombie's Egg Trick Muffin before and have done my own variations.  This time around I used a bagel flat (basically a flat bagel round) instead of an English Muffin.  You may remember that I LOVE using a few tablespoons of salsa on my Egg Trick Muffins so I did that here as you can see it oozing out of the bagel hole.  Inside I just did the seasoned tofu round patty and Daiya Cheese.  It was tasty!  I have 2 more disks of tofu ready to go in my freezer so I'm sure I will be doing this again soon!  I will most likely be doing a side of Tofu Scramble with the edges of the tofu I didn't use.

For a closer look at the tofu egg part - I thought I would take another snap.  Since hubby has been really suffering with his ongoing sinus infections and pneumonia yesterday we had a quiet day at home.  We were able to watch Fantastic Beasts.  It was good!  On Saturday there was a vendor show at our local YMCA.  It ended up being a pretty good turn out.  We were there with our Wildtree stuff! 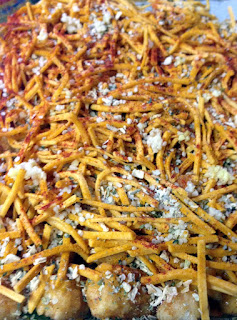 Now...on to my newest attempt a Tater Tot Casserole!  I told you I was going to do it!!!  And here is what I did!  This first photo is the casserole BEFORE it went into the oven!  Recipe... 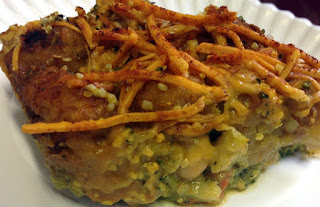 This next photo is the first piece I took out after baking it at about 350 degrees for 40 to 45 minutes.  I think it turned out great!  As you can see the top vegan cheese layer didn't melt well and I'm sure it was because there wasn't any liquid on top to assist with the melting. 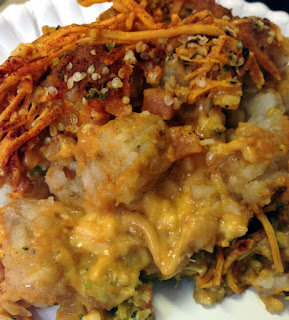 In this photo you can see that the middle layer vegan cheese melted nicely.  I think next time I will put more of the cheese in the middle and less on top OR make a vegan cheese sauce for the top instead of using the shreds and sprinkling them.  I have to say I was pretty tickled with myself on this one.  The only creamy vegan soup I could find at Tops yesterday was the Cashew Ginger one.  It worked pretty well.  I'm sure with a different creamy vegan soup it would change up the overall flavor and I'm looking forward to getting creative with it.  I know I will be able to get multiple meals out of this!  I'm considering making at least one sandwich out of it, too!  I will keep you posted on that if I attempt it! 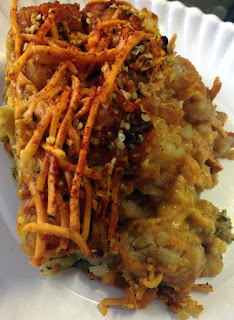 Tater Tot Casseroles are so versatile and the possibilities are endless!  If I had more time to bake 1 each week I'm sure I could come up with many more ingredient and flavor combinations!

As for the rest of my weekend I had a bit of a hard time with my aches and pains - especially after standing for 7 hours at the vendor show.  My Sciatica kicked in - or what I was thinking was my Sciatica - now I'm wondering if it was Fibromyalgia all along.  Perhaps it's both!  Heck, I don't know!  But another thing I did find out in my research was Apple Cider Vinegar for the Symptoms of Fibromyalgia.  I'm pasting that info below.  It's pretty interesting stuff!  Makes a lot of sense, too!  One of my mini goals for the first part of this week is to create some of those ACV Drinks at home.  Not only will DH drink them - so will I!

While apple cider vinegar does not treat fibromyalgia per se, it has been reported to alleviate many of the symptoms experienced by those living with fibromyalgia.
These include:


Fatigue – Stress (both emotional and physical) causes lactic acid to build up in the body resulting in fatigue. The potassium in apple cider vinegar combats this.