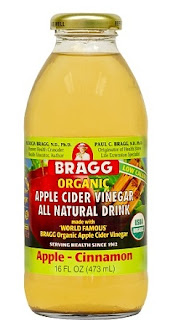 I almost wasn't sure what to blog about today but then I quickly remembered I was lucky enough to go on a 2 day shopping spree for food so I thought back about some of the things I was able to find and thought about my TOP 3 bottled finds and thought I would share them with you.

First...Bragg's Apple Cider Vinegar Drink - specifically their Apple Cinnamon Flavor.  WHY?  Well, some of you might know that DH has Crohn's and each day is a different experience.  Because of his Crohn's he has had other issues and we are finding out all go hand-in-hand in his case.  He was lucky enough to talk to a local doctor about his sinus infections and come to find out this same doctor also has Crohn's and seems to have many of the same problems as DH.  Long story short he needs to increase his intake of fermented foods.  Some of which he has already been doing.  DH doesn't seem to have a problem with ACV which I think is AWESOME.  This past weekend he tried this Apple Cinnamon flavor for the first time and LOVES it!  Problem?  It's hella expensive.  I'm going to try and make it myself soon!  I will keep you posted!  Something else I wanted to mention about this ACV Apple Cinnamon Drink is that I have now seen a vegan and an non-vegan version.  One version has honey in it so it's not technically vegan.  However, the one I bought for him had Stevia in it and no honey.  Interesting.  I wasn't aware of this until now!  Tricky, tho!  So keep your eyes peeled.  Unless you are a Apia(n) Vegan or Beegan that is. 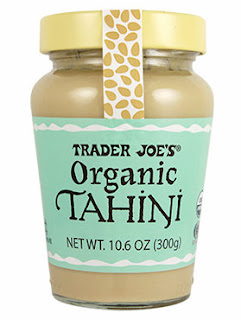 Next up...Tahini from Trader Joe's!  I have yet to try TJ's Tahini but I'm certain it will be a winner!  Tahini was one of the many staples I have been out of in my pantry lately.  When I took that trip to TJ's I was able to find a FRESH and refrigerated version of it but I was looking for the self version.  When I got up to the check out there was a YOUNG looking 75 year old in front of me claiming that she was a first time shopper to TJ's and the WONDERFUL cashier let her in on some of their secrets.  Secrets?  I have been to 3 different TJ's thus far and I didn't even know about their secrets!  So I listened.  He was telling her that if you wanted to try/sample anything in the store that wasn't already prepared that they would OPEN IT for you and let you try it right there in the store!  Heck!  I didn't know that!  Then he was saying that if you bought something and didn't like it they would give you your money back.  That's always a good thing, eh!?  He even said that with their wine if you didn't like it to bring back the empty bottle and they would refund you!  NICE!  When I stepped up to check out I had a nice conversation with the cashier, too!  I was telling him that I was having a hard time finding this Tahini so the cashier-assistant ran back and grabbed one for me!  AWESOME!  In the meantime I was telling him I was from out of town.  I jokingly asked him if it was always so CRAZY at this TJ's and he said YES especially on Saturdays and Sundays.  He said the BEST TIME to shop was right when they opened.  I told him I noticed that the one time I shopped at the one near Buffalo.  When I was paying him for what I bought I noticed he put something in my cart that I didn't buy.  I looked up and he said 'There you go - sorry it was so busy in here today"...MY GAWD...it was a bouquet of FLOWERS!  How sweet!!!!!  What a wonderful store AND guy, eh!?

So this blog post was a complete blab-fest, eh?  Sorry about that!  I'm not quite finished...teehee!  Another bottled YUMMY I found this past weekend was Just Thousand!  It was available at Target in Erie.  This was yet another first for me.  I know Just Mayo is my most favorite vegan mayo to date and I like their flavored vegan mayos, too!  I know that my buddy Hillary is pretty obsessed with a few of the Hampton Creek Dressings and rightfully-so!  I tried the Ranch before and it was pretty good!  I thought it was more of a Peppercorn Ranch than a Buttermilk Ranch but that's ok!  This Thousand Island was pretty spot-on!  I have to say that I make a pretty awesome vegan Thousand Island Dressing, too, if I do say so myself.  I think the main difference is the consistency.  Mine is thicker than Hampton Creek's.  So they have me there!

Anyhow...I'm pretty excited about these 3 finds for one reason or another.  Now I just have to find the ACV for CHEAP in BULK or make my own...which is probably what will happen at some point.
Posted by Jennifer at 5:53 AM