The other day I blogged about a Vegan Kale Burger I found at my local ALDI Store.  After reading the comments and a few other notes I've decided to blog a bit more about about the chain.  More specifically about their locations around the world, a bit about their history, and more about the vegan options that they seem to be offering more and more each day!
Above you will see a cropped screen shot of the world wide locations that I was able to find.  I know it's a bit hard to see - in some browsers you can click on it to see a larger photo OR you can keep reading because I have some more info on the locations in this post.  ALDI was founded in 1913...YUP!  103 years ago!  By brothers Theo and Karl Albrecht.  In 1962 they split into two companies...Aldi Nord and Aldi Sud.  They are headquartered in Germany. 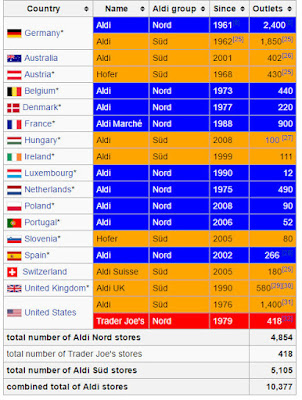 This next screen shot is from their Wiki Page and it shows the name they go by, which Aldi group they belong to, which year they started showing up, and how many outlets they have in that part of the world.  When you get to the bottom you will see in RED that The US Locations show 1,400 locations bare the Aldi name and an additional 418 stores have the Trader Joe's name.  The explanation of this on the Wiki Page says: "Both Aldi Nord and Aldi Süd also operate in the United States; Aldi Nord is owner of the Trader Joe's chain, while Aldi Süd operates as "Aldi"."  The closest Trader Joe's locations near me are in the Buffalo, NY, area which is about a 2 hour drive (maybe a little less), the Pittsburgh, PA, area which is about 2 1/2 hours from me, and the Woodmere, OH, area which is outside of Cleveland and just under a 3 hour drive from my house.  My local Aldi's is about a 5 to 7 minute drive from my house.  I have to say I would LOVE to visit Trader Joe's more often but since they are all over an hour and a half away that isn't always possible.  Aldi's is a great alternative. 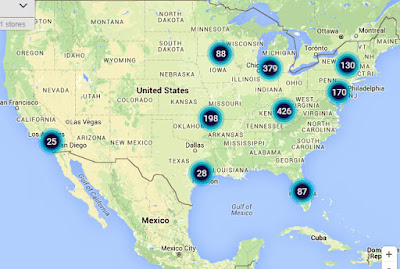 Here you will see how many locations are in each state here in the US.

A few issues the chain has had to face is back in 2013 when that 'horse meat' thing was taking place it was found they were one of the many stores in GERMANY that were found to have products that contained Horse Meat instead of "Beef".  From the information I found this was the case ONLY in Germany.  They quickly made the correction.  As a vegetarian/vegan I don't eat ANY meat so whether it's meat from a chicken, cow, fish, horse, etc I won't eat it regardless.  But I'm very much FOR consumer rights and the right-to-know, overall, regardless if the consumer is a vegetarian, vegan, or otherwise so this was something that was chalked up as a negative in GERMANY that is for sure.

Another thing that some critics have swung at them for is selling 'cheap' products.  This doesn't bother me.  I am often a thrifty shopper and like a deal.  I know a guy here that won't shop at Aldi's because you have to deposit a quarter to 'use' a cart.  I laugh at this because I think it is genius for more than 1 reason.  One...you get your quarter back!!!!  That means someone who works at the store isn't out casing carts all day long!  This is one of the cause/effect things as to why they have so few employees working at the location at any given time.  And you know what?  Those employees are paid pretty well here in the US.  Higher than minimum wage.  About 10 years ago I saw a sign that starting pay was over 30k a year here AND there were benefits!  I don't know what the current wage is but they are historically higher than minimum wage from what I have read about the history of their company.

A fun fact...in December 2002, a survey conducted by the German market research institute Forsa found 95% of blue-collar workers, 88% of white-collar workers, 84% of public servants, and 80% of self-employed Germans shop at Aldi.  I'm NOT sure the percentages here in the US but you see all sorts of people in there - as well as vehicles in their parking lot - everything from motorcycles, to Corvettes and Mustangs, to SUVs, Trucks, and Vans, to clunker and junkers.  So I like that they smash the stereotypes of only a 'certain shopper' shops there. 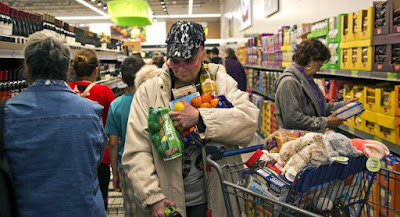 Another reason I like that they have 'rent a carts with deposit' is because it encourages conversation.  What I mean by that is when you go to get your quarter back there is often another person coming in and needing a cart - you can either give them your cart and save them a trip to the cart area and they hand you a quarter OR you can do a good deed for the day and tell them to keep their quarter!

One of the other ways Aldi is different from other stores - especially here in the US - is they are one of the few chains who not only ENCOURAGES you to bring your own bags (and reuse them) they make it hard for you NOT to which in turn is better for the environment.  They sell bags.  The canvas ones are HUGE and only $1.99.  I've bought several over the years.  They sell heavy-duty plastic bags for around 10 cents.  I am not completely sure about that because I don't by them.  They also have thicker paper bags with handles for around the same price.  They even sell freezer bags as an option.  If you don't have a bag and/or don't want to buy a bag there is another way to transport what you bought, too!  In the photo above you will see the products on the shelves...they are stacked in boxes.  At any given time you can find one that is empty or close to empty and grab it for your own personal use. 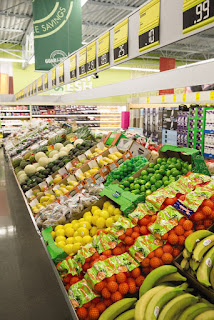 Another interesting tidbit is that Aldi's doesn't have a 'back room' or at least the ones I have seen haven't had them.  I think this is WONDERFUL...here's why...

When their trucks come in...they unload the trucks and the products are brought out on to the floor right away!  This is DOUBLY important when it comes to the produce!  Their produce is NOT laying in the back room somewhere until they find a spot for it - instead - it's comes off the truck and on to the floor right away!  End result?  You get fresher produce than in other chain stores.  SCORE! 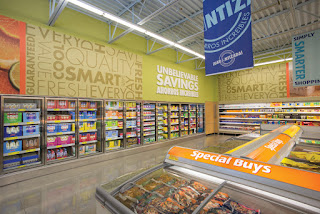 And speaking of Vegan Options...check out what Ireland did for the vegans there...they have a printable PDF of all of the vegan products they offer!  I have yet to find one for here in the US but I think it because it's constantly changing!
I'm grateful that I have an Aldi's in the small area I live in.  I know that more of them are popping up around the US.  I heard there is one opening in San Diego this month, too!  Actually you can see there are many opening in California and other states in their GRAND OPENING section of their website.

Oh!  I almost forgot - on the same site for the Ireland Vegans - they also have a Meat-Free Zone on their site, too!  Check that out here!

In comments - let me know if you have one nearby and what country you are in!