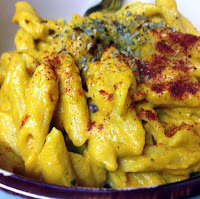 First I want to apologize for the lack of consistent posts as of late.

Since I am no longer writing for the main site I did in the past I lost a little bit of drive it seems.  But after some re-thinking and pause I am back and have some neat things for this site in the works, I think!

I received some sweet notes from people who miss my foodie posts!  Thanks so much!  I needed this!  I will certainly be posting more starting with right now! 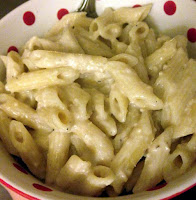 The first photo above is yet another vegan mac and cheese!  It turned out pretty good but I strayed from the recipe so I wouldn't dare try and remember it without my notes (which I do not have at the moment) but what I can tell you is that it's another Pumpkin Base and it was pretty yummers!

This 2nd photo is a quick pic of the Vegan Alfredo I made which was a complete cheat and not my own recipe.  I splurged and bought at Wegman's a week or two ago.  I didn't think the sauce was as smooth as I remember it.  I did get a deal on it, tho, I think the sauce was $3 off! 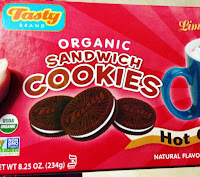 These lil pods of heaven, however, are my new favorite!  YUM!  I have to watch myself!  They are vegan and non-gmo and organic and all of that jazz!  But HECK they are GOOD!!!!

They are mint chocolate and to LIVE for!

I also found these at Wegmans a week or two ago!  I hope they continue to carry them! 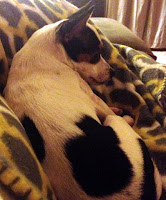 Next up...cute Cricket posing!  She's been adjusting well.  I can't believe it's been more than 6 months since she's been part of our family!  She's about 2 and a half years old maybe pushing 3...she's a spitfire!  Certainly an Alpha Dog!

Since Suzie passed - our home was really missing that Alpha Dog in the house.  It's funny because she's a female, too, as was Suzie...I always tell everyone...you have to watch out for those BLISS girls!  (Mommy included!)  She's still only about 4 and a half pounds but has no idea her size compared to other furkids and furfriends!

One thing I decided to start doing in 2016 is start a Gratitude Journal...deal of the day...was me finding a notebook for 27 cents (tax included!)

I was looking at this site and then started looking at other journaling ideas, too!  This page isn't mine but I will be posting some of mine soon!
Posted by Jennifer at 2:09 PM