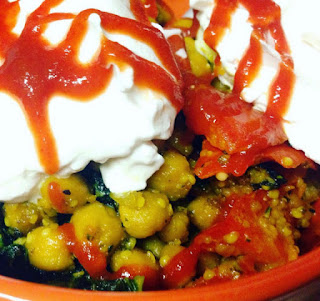 I've really been into Bowls lately!  It's a whole meal!  I literally throw whatever I have on hand and create something different each time and toss it in a bowl!

First up...Kale, Chickpeas, Onion, Garlic, Red Bell Peppers, Hemp Seeds, Turmeric, Spices, Vegan Sour Cream, Sriracha!  There may or may not be carrots in there, too!  I can't remember.  This was the first one I did of many when I first picked up a HUGE bag of chopped Kale.

If you mix the Sour Cream and Sriracha into everything else it made a nice sauce, too! 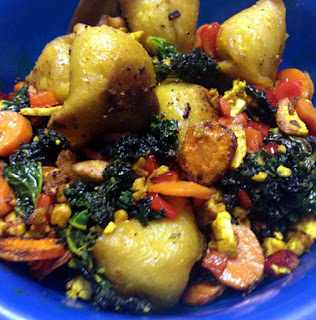 I did something VERY similar YET quite different with this next one.

Yes...THOSE Veggie Samosas!  The ones I got at the Dollar Tree!  I'm LOVING them...the best way to do them is to pan fry.  I usually use Grapeseed Oil.

Last night I did another bowl but didn't take a photo but have come to the conclusion that DH doesn't like the smell of Flax Oil...it was the oil I used last night in that bowl.  I'm trying to UP my Omega's while trying to combat this pain I'm having. 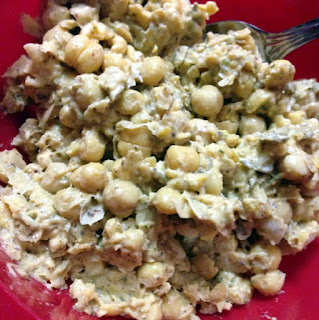 When in doubt...make some kind of chickpea spread.

My idea was to have sandwiches but let's just say this didn't make it to the bread.  It was somewhere in between vegan egg salad and vegan tuna fish.  I know that sounds weird but I added dulse and it made it a little fishy (just a hint) and the rest of it had the texture moreso of egg salad.  I've done vegan egg salads using chickpeas before and might have to try and do a more true vegan tuna fish soon.

I have more foody type things to blog about but I am going to save them for tomorrow' MWM (MidWeek Munchies!)
Posted by Jennifer at 5:24 AM