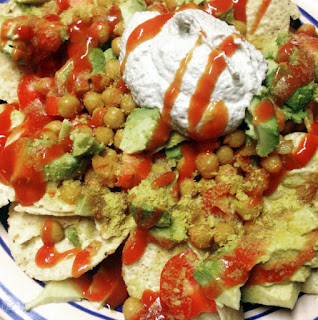 I'm back to eating mostly from my stash/pantry with the exception of some fresh avocados I bought on Sunday.  I rarely by Vegan Sour Cream because it's NOT in my area and I would rather spend money on something else so you will be seeing more and more Sour Cream alternatives that I have made myself at home here on my blog.  Take this one for example.  On top of this heaping pile of nachos I made a sunflower seed based sour cream.  I also used chickpeas, avocado, corn chips, taco sauce, nutritional yeast, and tomatoes. With the chickpeas I put them on stove top first with paprika, onion, cumin, and garlic and chili sea salt.

The Sunflower Sour Cream had 3/4 C Sunflower Seeds, 3/4 C Water, 2 T Lemon Juice, 1 t Wildtree Garlic Galore, and 1/2 t Wildtree Absolutely Onion which is NOW Vegan AND Organic!  The old version of their Absolutely Onion Blend had whey in it.  Since it now has the organic label on it they revamped the ingredients and recipe and it's now on the VEGAN list!  YAY!  So many of the Wildtree products are naturally vegan and nearly the whole catalog is at least vegetarian (with the exception of just a few items)!  If you would like more Wildtree ideas when it comes to vegetarian and vegan dishes go to the search box on my sidebar and type in "wildtree" and they will all pop up!  If you are ever interested in purchasing anything let me know! 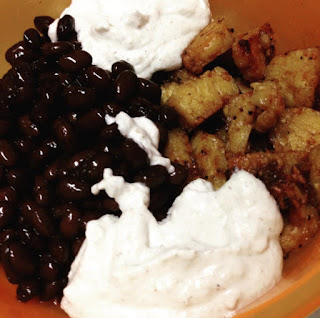 Here's another meal I threw together using what I had on hand.  I made another sour cream but this time it was made with a Macadamia Nut base.

I found this one was creamier than the Sunflower Seed recipe but both were tasty in their own right.

Yes - those are plain black beans on the left.  And on the right that is cubed tempeh that I did on the stove top with Wildtree's Golden BBQ Sauce.  I really like this product - it has a subtle mustard base.  It doesn't really taste like a 'BBQ Sauce' but has a nice flavor regardless!  Yes!  It's another Wildtree Vegan offering! 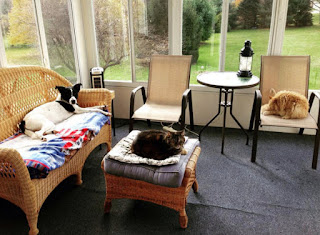 And just for fun...my fur-siblings!  YES...siblings!  These 3 are my sisters and brother - my parents furkids!  Lexi is the dog and the cats are Bernie in the middle and Jeter on the right.  And in case you didn't make the connection - the cats are named after Bernie Williams and Derek Jeter both former New York Yankees!

Sometimes I think my parents put this sun room addition on just for the furkids! LOL
Posted by Jennifer at 5:57 AM