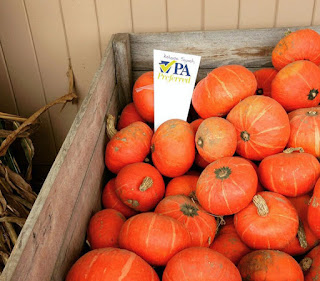 On Thursday I mentioned I purchased 2 new-to-me types of produce.  One being Orange Kabocha Squash and the other item was a Blondee Apple I actually got as a free sample at my local produce stand.  Of course I hit up Google for more info on both of these foods and here is some of what I found out.  Kabocha Squash is grown in Fall, Winter, and Spring and is a Winter Keeper meaning that it can last 4 to 5 months!  YAY!  They are said to be one of the sweetest types of squash!  I read they pair well with Broccoli, Raab, Radicchio, and Dandelions.  You can roast it for 30 minutes in the oven with little effort.  I like that!  And I really am drawn to this recipe that I found, too! 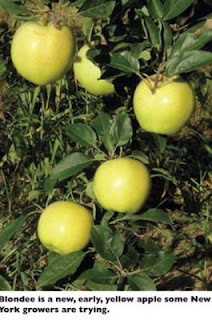 My last trip to my favorite local produce stand wasn't the first time I noticed them offering free samples of something.  This time I took them up on the offer!  They had small, yellow apples which were called Blondee Apples.  They are a lot like Gala Apples.  They were originally found growing among Galas and some people actually call them the "Yellow Gala".  I read that these apples are resistant to bruising...that's a PLUS!  And can be kept for several months in the refrigerator!  Eventho this is becoming popular in New York State - and I actually live in Pennsylvania - but right ON the state line - it doesn't shock me that I found them here now that I do know more about them.  BUT this apple was introduced in 2000 by a couple from Ohio.  It wasn't available to the market until 2012.  I'm writing this prior to actually TRYING the apple but I am looking forward to it.  I LOVE trying new types of produce!  What's the last thing you tried that was new-to-you?
Posted by Jennifer at 2:00 AM