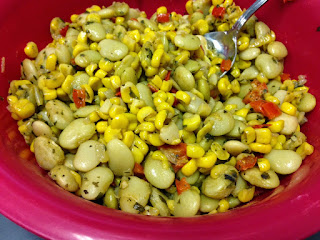 The Vegan MoFo Prompt for today was to make or eat something inspired by a book or film.  I went back thru some of my faves and decided to do a collaboration!

First up...remember Gopher's Succotash from Winnie The Pooh?  I vaguely remember it since it's been so long since I have seen that movie but I do like Vegan Succotash so why not?  Here's a photo of one of the Vegan Succotash dishes I have done in the past.  I think my secret ingredient is a splash of Balsamic it seems to make everything better! 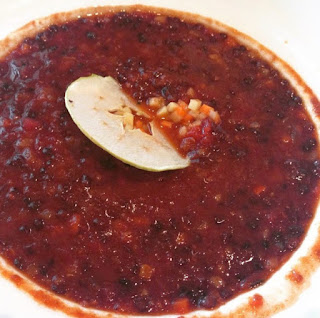 Next up is the Porridge mentioned in Beauty & The Beast.  I always 'assumed' that Porridge was like Oatmeal.  Well, when I traveled to The Breakers in West Palm Beach, Florida, earlier this year they featured this Vegan Porridge on one of their menus and it was one of the most memorial meals I've ever had while traveling!

The Porridge was made up of lentils and spices.

What you see on top is a single apple crisp with a dab of salsa.  I really must make some of this very soon.  Of course it will be my own version but something is better than nothing, right!? 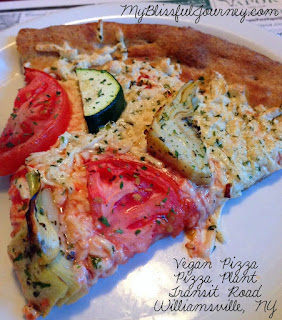 Remember when he gets the Little Nero's Cheese Pizza?

Well, here are a few vegan cheese pizzas I have enjoyed over the last few years!

First up...is the vegan pizza from Pizza Plant in Williamsville, NY.  YUMMO!  I love The Pizza Plant because of all of the veggie options they offer.

I also love their PODS and their Vegan Nachos!

I think I will have visit there again, soon! 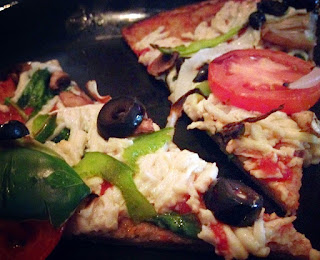 Last year around this time hubby and I traveled to Tennessee and one of the places we went to eat was Mellow Mushroom.  It was my first time ever being to a Mellow Mushroom and I was completely stoked they had vegan options including this pizza!  They didn't skimp on the veggies either!

Comparing the two I think I liked the Pizza Plant Pizza better than Mellow Mushrooms but I do like them both and was so appreciative that both places had options! 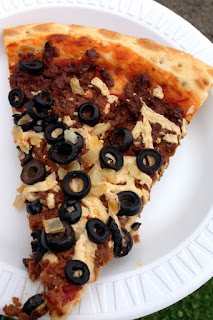 And speaking of Vegan Pizza options...

I couldn't pass up another chance to plug The WNY VegFest!

This photo is a picture of the Vegan Taco Pizza that I had last year while visiting WNY's first annual VegFest in Buffalo!  We had so much fun that my sister and I went back this year.  If all goes well we are thinking about making it an annual tradition!

AND...a heads up...2016 I just might be going to TWO VegFests! I heard from organizers in Erie, PA, that they will start holding VegFest in the upcoming year!  YAY!

Since this Taco Pizza shown here was more 'fake meat' than cheese and veggies I have to say I like the other two options better but again am pleased they offered this at VegFest, too! 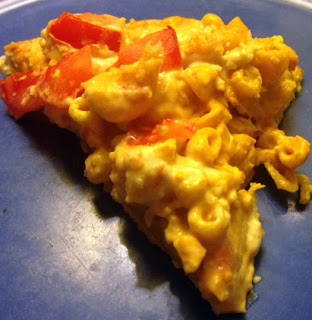 And, FINALLY...a Vegan Pizza that I have made all by myself!

If you have visited my blog before this might look familiar from a few months back.

It's the Vegan Mac & Cheese Pizza I tried making.

Sure...it needed a little work on the dough but I am always up front about my LACK of baking skills...this INCLUDES dough!    But they flavor was wonderful and I felt like I accomplished something because I did do it by myself!

So what do you think about my food?  And the films?
Posted by Jennifer at 2:30 AM