WOW Over The Weekend 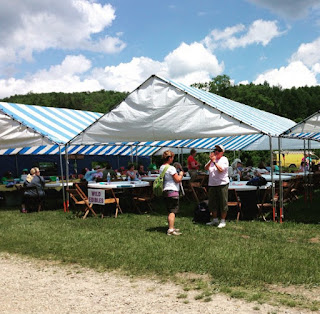 This past weekend my mom, dad, and I spent about 4 hours over at Chapman State Park outside of Warren/Clarendon, PA.  We set up our Wildtree table but sales weren't wonderful.  Last year we did much better but last year we were placed directly across from this tent area that you see here - that's where everyone ate lunch...this year we were further down...but that's ok...it was a nice day!  I really love this state park and the area for this event.  The event was WOW!  It's essentially Women In The Outdoors...or Women Outdoor Workshops.  Sure many of them I wasn't interested in at all...the fishing/hunting/gun aspects but there were a lot of different things going on not just the things I didn't support or enjoy, thankfully. 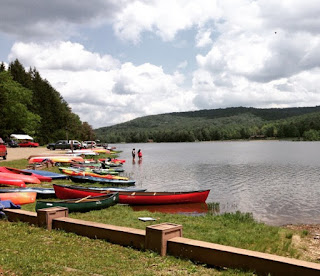 Some of the things that were interesting to me but I still didn't participate in - because we were vendors instead - were...Wild Edibles which is also seen in the first photo!  You could take a tour around the park grounds and identify edible flower, herbs, greens, etc.  There was canoeing and kayaking.  There were people doing watercolor painting outside, too!  There was a lot of hiking which was cool!  There was a table of people making Squirrel Boxes...like if they get in your attic you can catch and release them humanely.  A few other things I noticed going on on the grounds were Archery, several cooking demos, even a Dutch Oven demo. 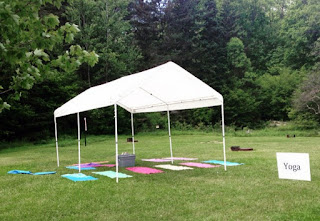 If I participated in anything I most likely would have signed up for the Yoga and Tai Chi.   I have photos of both here.  Another event I would have enjoyed was the Bird Watching.  I know there were some American Bald Eagles  that were seen that day!  GeoCaching sounds interesting and I know a lot of people who do it and love it.  There is a very popular Self Defense Class during this annual event, too!  And there was different classes on upcycling, too!  One of them used mismatched old silverware to make windchimes, birdhouses, and other decor. 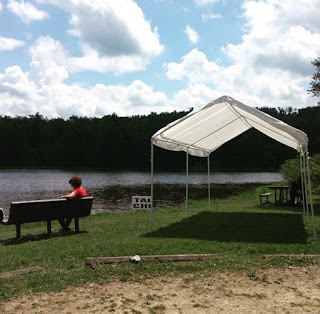 There were many Drum Circles throughout the day, too!  We were able to hear those, to course.  There was a folk jam band there playing throughout the day, too!  I'm not sure if they did this class this year but last year I remember there being a class where you could build fairy houses.  Many of them where super cute!  They have various gardening classes but I hadn't seen them either year.

Hopefully next year I will get a full list of events to report back with.  I'm not sure if we will set up for Wildtree next year but I might try and participate in some of the classes instead.

As long as the weather cooperates it's a great day and venue!
Posted by Unknown at 6:17 AM